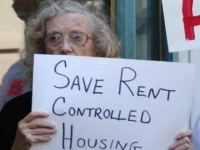 This November, whether San Francisco's Board of Supervisors remains pro-tenant, pro-labor, and progressive will be determined by what happens in the swing supervisor districts of 1, 3 and 11. With current Supervisors McGoldrick, Peskin and Sandoval termed out, theirs are moderate districts which could swing either way. Rent control is at stake; the SF rent control law is just a local ordinance which could be weakened or ended by a 6-5 vote of the Board of Supervisors.

Landlords and realtors are spending hundred of thousands of dollars against the pro-tenant candidates Eric Mar in District 1, David Chiu in District 3, and John Avalos in District 11 in an attempt to buy the election for their candidates: Sue Lee in D1, Joseph Alioto in D3 and Aasha Safai in D11.

Community activists have called for a protest on Thursday, October 23rd, to picket the realtors and landlords funding the "downtown" slate. Protesters will gather at the San Francisco Association of Realtors office at the corner of Franklin and Grove Streets at 5:30pm.