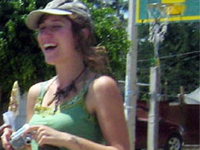 Marcella "Sali" Grace Eiler, a solidarity activist with the struggle in Oaxaca and Chiapas, was found dead on September 24th in a deserted cabin twenty minutes from the village of San Jose del Pacifico, Oaxaca, Mexico. She was brutally raped and murdered.

Sali, born in Eugene, Oregon, USA, was always inclined to help. She used her artistic talents to paint, Arabic dancing to raise funds for the struggle, put on punk shows, published photos on indymedia, gave self-defense courses to women, and much more. Sali was also an international accompanier for people in Oaxaca who felt harassed by the Oaxacan government of Ulises Ruiz Ortiz.

On different occasions and to different people, Sali mentioned that recently she had suffered political persecution and surveillance in Oaxaca. Many people believe that her murder is part of the widespread repression against the social movement and directed particularly at international observers. Because of this, it is believed that the intellectual authors of Sali's killing are the same who ordered the repression against the people of Oaxaca in their struggle for justice and freedom.

On September 30th, the day Sali would have turned 21, a march was held in Oaxaca demanding justice for Sali and an end to violence against women. (