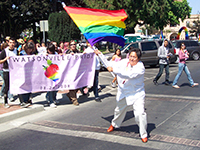 The 2008 Watsonville Gay Pride Parade Committee, a group of diverse volunteers, organized the first ever pride parade in Watsonville on August 24th. The celebration was a huge success, with 325 people marching through the streets and over 500 enjoying a party in the plaza.

The Watsonville Gay Pride Parade Committee works to foster understanding and awareness of the issues that affect the GLBTQ community in the Central Coast.