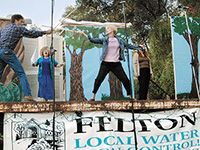 The community of Felton prevailed in its six-year fight to acquire its water system from California-American Water (Cal-Am), a subsidiary of the German multinational corporation RWE. Cal-Am and the San Lorenzo Valley Water District (SLVWD) announced a purchase agreement on May 30th, less than a week before the planned start of an eminent domain trial where a jury would have set the value of the water system. SLVWD will make a total cash payment of $10.5 million to acquire the water system, including the 250 acres of forested watershed land, which Cal-Am is 'donating' to SLVWD. In addition, SLVWD will assume the $2.9 million loan that Felton residents have been paying for a new treatment plant.

“Felton FLOW's landmark victory over private water interests demonstrates that grassroots action can stop corporate interests from profiteering on water,” said Wenonah Hauter, Executive Director of Food & Water Watch. “This win, combined with the failure of RWE to efficiently and affordably deliver water to the residents of Felton is yet another example of why water utilities should be managed by the public. Felton’s victory should inspire other communities suffering from the effects of privatization to take back their water systems.” Read More