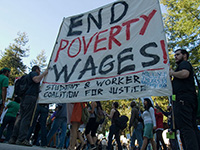 AFSCME Local 3299's strike, planned for June 4 - 5, has been postponed indefinitely. UC hired the infamous anti-union law firm Littler Mendelson, a firm that boasts on their website about their expertise in avoiding unionization and busting unions. Suddenly, UC Executives claimed to have new proposals for AFSCME and asked for negotiations to resume -- even though they already gave AFSCME their "last, best, and final proposal." In the eyes of a Republican-dominated state labor board (Public Employee Relations Board or PERB), these alleged new proposals were enough to overturn AFSCME's right to strike.

Under threat of legal injunctions and unfavorable rulings from PERB, AFSCME was forced to rescind their notification of intent to strike on June 4 - 5. No strike can take place in the remainder of this academic year. This is excellent timing to attempt to demoralize the power of students immediately before the summer.

UCSC is inaugurating its 10th Chancellor on Friday, June 6th at 10am with all eyes aimed on the illustrious world class institution. The UC does not want the stain of students standing up for workers who remain in poverty to precede the image of the regala events with an effective strike—the likes that UC has never seen before, UC-wide. By forcing AFSCME back to the table with these legal technicalities UC is depending upon confusion and frustration to deflate organizing and let the inauguration pomp take place, unheeded. Read More