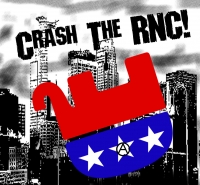 On September 1-4 of 2008, the Republican Party is holding their convention in Minnesota. The RNC Welcoming Committee wants to make sure that "this time the fear-mongers will be met with their own biggest fear: people mobilized, organized, and taking the future back into their own hands."

At Station 40 in San Francisco, the Welcoming Committee and a member of Bay Area Unconventional Action gave an overview of organizing in Denver against the DNC. Someone from Direct Action to Stop the War (DASW) spoke about the upcoming anti-war actions in the Bay Area on March 15th and 19th.