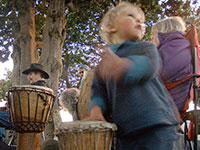 On two successive Wednesdays, December 26th and January 2nd, police officers ordered a peaceful drum circle to leave the parking lot on Cedar Street alongside the Santa Cruz Farmers Market. On December 26th, Sargent Dan Flippo stated that the Farmers Market folks had "complained" about the drum circle, however there was no Farmers Market that day. The police are enforcing a new municipal ordinance, which went into effect in mid-November, that activists refer to as the 'Parking Lot Panic Law.' The merchant-backed law prohibits lingering in a parking lot or garage unless you have a vehicle there (and then only for fifteen minutes). Anything else (waiting in your car for a friend, eating lunch, talking to friends, playing music...) is trespassing, illegal, will get you hassled by Santa Cruz's finest, and, ultimately, fined. Read More |

Read More and Watch a Video

And the Beat Goes On at the Cathcart Parking Lot |