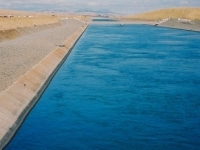 A federal judge's written order on Friday, December 14 to protect delta smelt was welcome news for the California Delta and those who are battling to protect it, in light of the continuing collapse of the Bay-Delta ecosystem revealed by the latest California Dept. of Fish and Game surveys.

Judge Oliver Wanger of the U.S. District Court in Fresno issued his final written order to put in place a decision he initially made on August 31. Environmental groups say this ruling will protect the smelt and the Bay-Delta Estuary ecosystem from "being further degraded by fresh water diversions."

"Judge Wanger's order for more responsible operations of the Delta pumps comes in the nick of time for the delta smelt and the delta ecosystem," said Tina Swanson, senior scientist with The Bay Institute. "Results from this year's survey show that delta smelt numbers, as well as numbers for most of the other delta fishes collected by the survey, have fallen to a new record low. We have very little time left to save this species and its ecosystem."

The smelt is a 2 to 3 inch long indicator species found only in the Bay-Delta Estuary. The species was listed as "threatened" under both the federal Endangered Species Act (ESA) and California Endangered Species Act (CESA) in 1993. The species began recovering in 1995 with the arrival of big water years, but declined dramatically after 2001 with increased exports out of the Delta.

The order follows a May 2007 decision that a federal "no jeopardy" assessment of the risk to threatened fish from massive pumps in the Sacramento-San Joaquin River Delta was illegal and must be rewritten. State and federal water project managers relied on the politically manipulated "biological opinion" by the U.S. Fish and Wildlife Service (FWS) to justify increased water exports to farms and cities south of the delta.