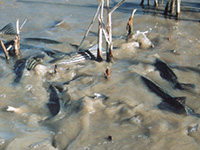 Thousands of fish are stranded on Prospect Island, located on the northern section of Sacramento-San Joaquin River Delta, due to the draining of the island by a contractor hired by the Bureau of Reclamation. As of November 21st, striped bass make up the vast majority of the fish seen stranded on the island. Endangered and threatened species, including Delta smelt, salmon and steelhead, are expected to perish soon unless a fish rescue is conducted.

"We saw thousands of striped bass, two sturgeon, hundreds of bluegill and two 15 to 18 pound salmon stranded in the remaining water," said Bob McDaris, owner of Cliff's Marina in Freeport. "We also saw two steelhead and lots of carp. I was amazed by the number of fish that were stranded on the island and I figured that somebody should do something about it."

Jeff McCracken, spokesman for the U.S. Bureau of Reclamation, said the agency, after being alerted by anglers and others about stranded fish, ordered the pumping suspended. "The Bureau and the U.S. Fish and Wildife Service will reevaluate this situation to see if we can salvage the fish," he said. "At issue is whether there are Delta smelt stranded on the island."

However, he noted that probably no decision about this would be made until Monday because of the absence of many personnel over the Thanksiving Holiday weekend.