Newswire
Calendar
Features
Home
Donate
From the Open-Publishing Calendar
From the Open-Publishing Newswire
Indybay Feature
Publish to Newswire
Add an Event
Related Categories: Central Valley | Environment & Forest Defense
Bureau of Reclamation Strands Thousands of Fish on Delta Island
by Dan Bacher
Wednesday Nov 21st, 2007 7:24 PM
Thousands of fish are stranded on Prospect Island, located on the northern section of Sacramento-San Joaquin River Delta, due to the draining of the island by a contractor hired by the Bureau of Reclamation. Though striped bass make up the vast majority of the fish that I observed stranded on the island this afternoon, endangered and threatened species including Delta smelt, salmon and steelhead are expected to perish soon unless a fish rescue is conducted. 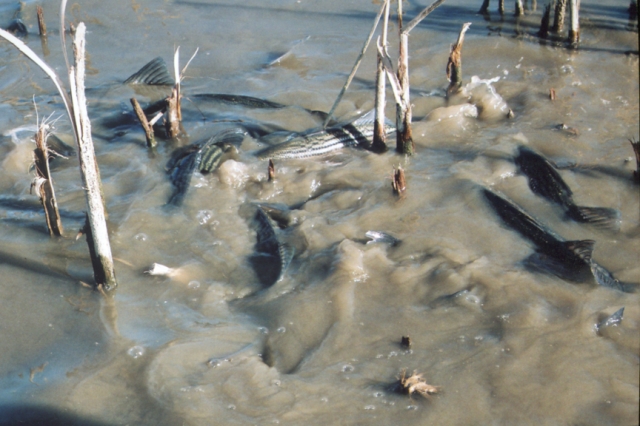 I just got back from investigating an impending massive fish kill at Prospect Island in the northern section of the California Delta between Miner Slough and the Sacramento Deepwater Channel. Bob McDaris, owner of Cliff's Marina in Freeport, Bob Boffitt, a KFBK Radio reporter, and another KFBK reporter and I went by boat to the area where the levee is being repaired by the U.S. Bureau of Reclamation.

We slogged through the mud in waders and saw large schools of stripers with their dorsal fins, backs and tails out of the water as they struggled to survive. I saw a dozen dead striped bass, along with one dead bluegill and a couple of dead pike minnows. Of course, we walked through just a tiny fraction of Prospect Island - McDaris on Tuesday estimated that there were thousands of fish stranded in a larger area that he pointed to after we took photos and videos.

The massive stranding of fish came to McDaris' attention when he and a local hay farmer, John Soto, went out prospecting for ducks on the island on Tuesday. Instead of finding ducks they found a fish kill in progress.

"We saw thousands of striped bass, two sturgeon, hundreds of bluegill and two 15 to 18 pound salmon stranded in the remaining water," said McDaris. "We also saw two steelhead and lots of carp. I was amazed by the number of fish that were stranded on the island and I figured that somebody should do something about it."

McDaris contacted Bob Simms, host of the KFBK Outdoor Show, Mark Wilson, striper angler, Matt Weiser of the Sacramento Bee members of the California Striped Bass Association (CSBA) and this reporter to see what we could do about rescuing the fish. Over 35 people, including CSBA members, met McDaris at Cliff's Marina this morning to investigate this latest fishery disaster and see if they can do anything about it.

Unfortunately, the brush, tules and terrain make it very difficult for anglers to carry fish out in buckets or ice chests to be released into Miner Slough, as CSBA members and DFG staff did several years ago when the water out of flooded Jones Tract was being pumped out. I assisted in that rescue.

While I was there today, I spoke to a DFG warden, Carolyn Djody, who was there to assess the extent of the fish stranded on the island. At that time, she hadn't examined the area where the fish were located.

"We had a call that there were fish dying on the island," she said. "This is a federal project, so the proposal to pump water out was reviewed by the U.S. Fish and Wildlife Service. It's not our project."

McDaris and other anglers are very concerned about the delta smelt and other endangered and threatened species that may be impacted by further pumping of water off the island without the initiation of some sort of fish rescue.

Jeff McCracken, spokesman for the U.S. Bureau of Reclamation, said the agency, after being alerted by anglers and other about stranded fish, ordered the pumping suspended. "The Bureau and the U.S. Fish and Wildife Service will reevaluate this situation to see if we can salvage the fish," he said. "At issue is whether there are Delta smelt stranded on the island."

However, he noted that probably no decision about this would be made until Monday because of the absence of many personnel over the Thanksiving Holiday weekend.

The levee broke in 1998, flooding the island, and then was repaired. The levee broke again in January 2006 and the Bureau of Reclamation authorized the current repair operation this year.

"After the levee break in 2006, CalFed said to leave the levee like it was and nothing happened," said McCracken. "However, then five boats capsized when entering the levee break. Two of them required Coast Guard assistance. Also, there is a lot of vegetation and trees that created hazards to boats."

Because of the public safety and liaibility issue, the Bureau decided to go ahead with hiring a contractor to repair the levee break and pump the water off the island back into Miner Slough.

"We consulted with the National Marine Fisheries Service and U.S. Fish and Wildlife Service about what to do," he said. "They said that because of all of the trees and brush found on the island, there was no effective way to do fish salvage."

The two fishery agencies gave the Bureau the go ahead to repair the levee, with the stipulation that the contractor pump at the lowest tides so as many fish as possible would be able to move off the island as it drained.

Meanwhile, as we wait for a decision by federal officials about how, when and if the fish will be salvaged, thousands of fish, including an unknown number of endangered delta smelt and other endangered and threatened species, are expected to perish.

I was appalled by witnessing the spectacle of hundreds of striped bass thrashing in their final hours on the surface of the water at Prospect Island. The stripers, because of their size and schooling nature, were the easiest to see in the muddy water.

I wonder how many stranded delta smelt, sturgeon, king salmon, steelhead and other species will die and go belly up as the remaining oxygen in the water is used up. After we witnessed a disaster two weeks ago when the Cosco Busan dumped 58,000 gallons of bunker fuel into San Francisco Bay, it's horrible to see yet another man-made environmental catastrophe take place, courtesy of the federal government.

I urge people concerned about the stranding of thousands of fish on Prospect Island call the following numbers and urge the federal and state governments to do something about saving the fish: 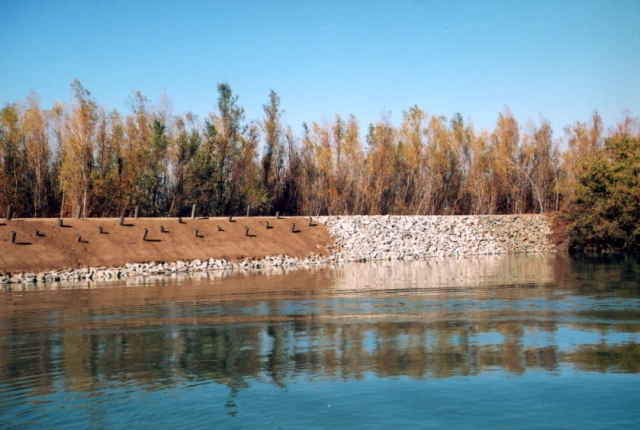 original image (839x564)
This is where the levee on the Miner Slough Side of Prospect Island was repaired.
photo by Dan Bacher.
§Dead Striped Bass
by Dan Bacher Wednesday Nov 21st, 2007 7:24 PM 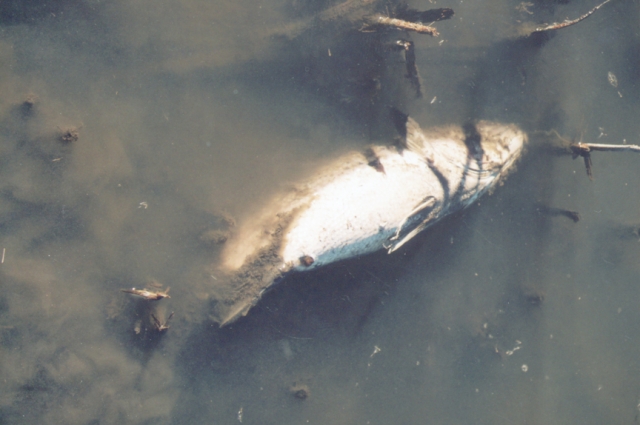 original image (864x574)
3.
Many more striped bass like this one are expected to die in the coming days unless a fish salvage operation is conducted on Prospect Island.
Photo by Dan Bacher. 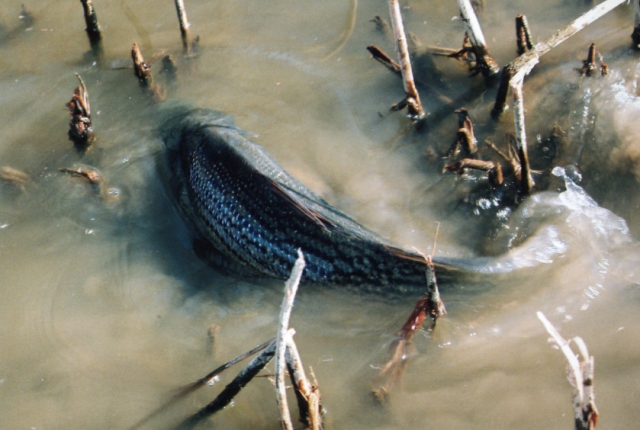 original image (839x564)
4.
Here is one of the largest striped bass that I saw on Prospect Island today.
Photo by Dan Bacher.
§Another Dead Striper
by Dan Bacher Wednesday Nov 21st, 2007 7:24 PM 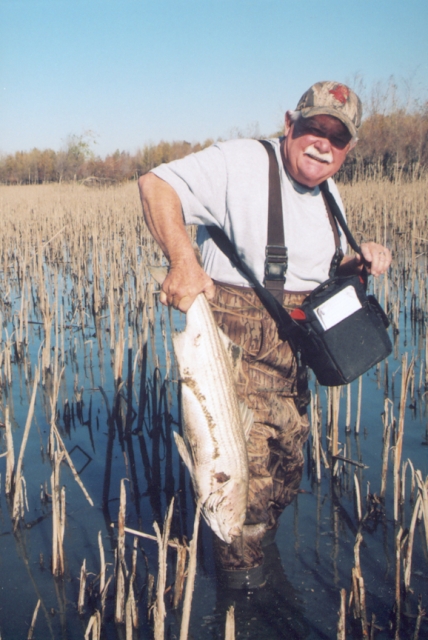 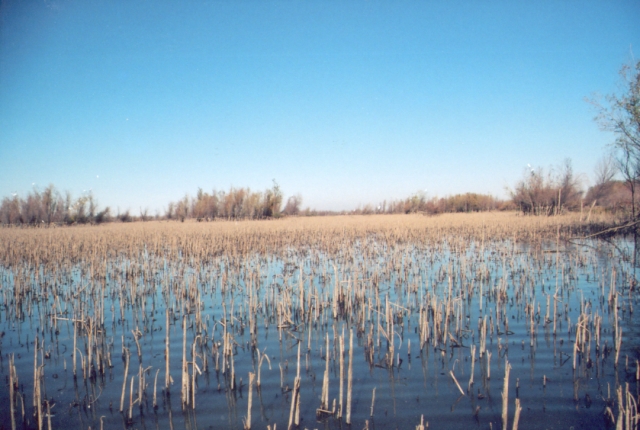