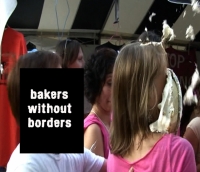 On June 30th, Bakers without Borders and Co-optation Watch pied Medea Benjamin at the US Social Forum. Bakers without Borders and Co-optation Watch state that they took action "to demand accountability from a self-appointed "spokesperson" whose actions further the commodification of resistance and sabotage our movement's sustainability and credibility. This person's actions benefit the NGO Industrial Complex at the expense of real democracy and solidarity."

In particular, Bakers without Borders and Co-optation Watch hold Medea Benjamin accountable for, "Publicly siding with the police and municipal authorities against direct actions performed at the World Trade Organization protests of 1999. Administrative authority in an organization that hordes funds raised for community organizations in Guatemala. Exploiting and dominating movement space, resources, and publicity in the global justice and associated movements."

Read more with photos and video | Communique on USSF Pieing

Medea has responded to the incident, writing:
On the eve of the closing of the first ever US Social Forum in Atlanta, CODEPINK hosted a reception in the Peace and Justice Tent. We raised our glasses in a toast to the historic gathering and the wonderful activists from around the country. ... Suddenly, while basking in the warmth of the camaraderie, I felt someone’s hand smashing into my face. It was so quick I didn’t have time to even close my eyes. With goo dripping down by face and my eyes burning, I realized I had been “pied.”
.... In the wake of the assault with a high-caloric weapon, I could have followed the footsteps of Willie Brown or Ann Coulter by pressing charges. But I wouldn’t do that. Why? I actually feel sorry for people who harbor so much resentment and come from a place of such anger.   Read More...
Related Categories: U.S. | Arts + Action | Global Justice & Anti-Capitalism | Front Page