Add an Event
Newswire
Calendar
Features
Home
Donate
From the Open-Publishing Calendar
From the Open-Publishing Newswire
Indybay Feature
Publish to Newswire
Add an Event
Related Categories: U.S. | Global Justice & Anti-Capitalism
To Those Who Threw a Pie in My Face, Let’s Swap Recipes
by Medea Benjamin
Monday Jul 2nd, 2007 12:28 AM
Reflections on being pied at the US Social Forum. 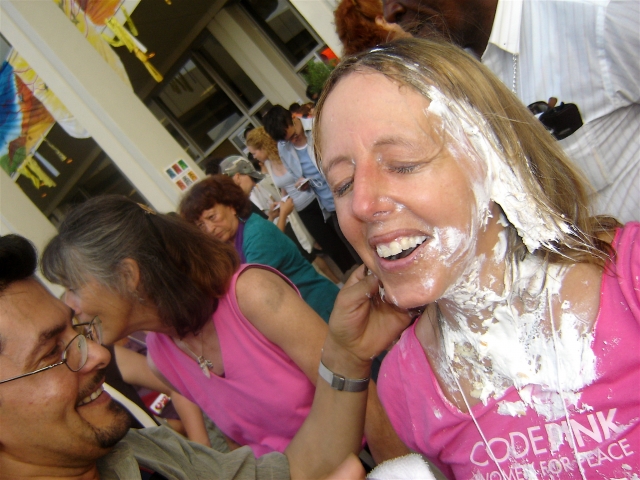 original image (2048x1536)
On the eve of the closing of the first ever US Social Forum in Atlanta, CODEPINK hosted a reception in the Peace and Justice Tent. We raised our glasses in a toast to the historic gathering and the wonderful activists from around the country. We belted out “Ain’t gonna study war no more” and other peace songs in three-part harmony. We laughed raucously as we enjoyed each other’s company. And we closed with a congo line that snaked out of the tent. Suddenly, while basking in the warmth of the camaraderie, I felt someone’s hand smashing into my face. It was so quick I didn’t have time to even close my eyes. With goo dripping down by face and my eyes burning, I realized I had been “pied.” I invite you to see the photos and video that my attackers posted online. You’ll see how our merrymaking was spoiled by not-so-merry pranksters guilty of a pie-by hit and run.
http://www.indybay.org/newsitems/2007/07/01/18432047.php

It’s particularly odd that this group of pie-slingers chose the Social Forum for their attack. The first ever Social Forum in the United States was supposed to be a place to grow our movement, to build unity, to respect differences, to embrace each other. These Bay Area Bakers could have spent their time meeting Katrina survivors from the Gulf, homeless advocates from Atlanta, immigrant rights leaders from Chicago or attending some of the 900 workshops being offered. Instead they spent their time plotting an attack against someone with whom they probably agree on 90 percent of the issues. The organizers of the forum, seeing the incident as both an individual assault and an assault on the very principles of the forum, publicly denounced the attack during one of the main plenaries.

So, you might ask, why was I targeted? While the pie-throwers fled the scene of the crime, they did leave behind leaflets. I am, they say, “a self-appointed ‘spokesperson’ whose actions further the commodification of resistance and sabotage our movement's sustainability and credibility. This person's actions benefit the NGO Industrial Complex at the expense of real democracy and solidarity.” That’s a mouthful from these self-appointed critics, judges and prosecutors. But it actually sounds like good fodder for a healthy debate. Instead of a “pie-by”, they could have dropped by any of the five open workshops where I was speaking and we could have had a great discussion. Or they could have easily found me at the Global Exchange or CODEPINK tables where I was hanging out for days, chatting with anyone who wanted to talk.

But the pie-flingers were not interested in fruitful dialogue, but tasteless condemnations. Their leaflet went on to say:

1. I sided with police and municipal authorities against direct actions performed at the World Trade Organization protests of 1999 (Truth: I disagreed with the tactic of smashing windows and helped gather an activist clean-up crew to show our goodwill to the people of Seattle. And after eight years, this grudge is mighty stale!)

2. My organization Global Exchange hordes funds raised for community organizations in Guatemala (Huh? I have no idea what this one means. We promote fair trade and have helped channel millions of dollars to producers all over the world, including Guatemala. See http://www.globalexchange.org)

3. Global Exchange solicited the economic dependency of residents in Cuba and then abandoned the project, pushing the Cuban participants deeper into poverty. (Truth: We have organized hundreds of people-to-people delegations to Cuba, and even with the Bush administration coming down on us, we still take groups to Cuba to build ties of friendship.)

4. I publicly refused to endorse a call for Israel to unconditionally withdraw from Southern Lebanon in the 2006 war. (Truth: I always called for unconditional withdrawal, and even went to Lebanon in the midst of the bombing to show my commitment to an immediate ceasefire.)

Having been involved in the movement for social justice for almost 40 years now, I’ve developed thick skin after facing so many attacks from hateful, violent people. Whenever I appear on TV shows such as Hannity and Colmes or Bill O’Reilly, I receive vicious messages on my phone and threatening emails that scare my children and anger my husband with their variations on the theme of “Die, you ugly, communist, lesbian, American-hating bitch.” I have learned over the years that attacks come with the territory—but it does take me by surprise (and hurt the most) when the attacks come from the left instead of the right, from people who are supposed to be your allies.

Years back, I remember reading with amusement about the Biotic Baking Brigade that roamed the world flinging pies in the face of the “upper crust”—people deemed responsible for corporate crimes. These included the CEOs of Monsanto, Novartis, Chevron and ENRON. In fact, I had organized a protest against ENRON CEO Jeffrey Skilling in San Francisco when a young woman in the audience threw a pie in his face. It was an act of “speaking pie to power,” she said.

But while a pie in the face of the ENRON crook might seem like just desserts, other targets the brigade chose were half-baked. Ralph Nader was pied while at a San Francisco press conference supporting a Green Party candidate for Governor. Sierra Club Director Carl Pope was pied for supposedly supporting legislation that would increase logging in California—a bill the Sierra Club actually opposed. And then all sorts of random people were pied—filmmaker Jean-Luc Godard, artist Andy Warhol, singer Kenny Rogers, Jimmy Carter’s brother Billy. With no quality control, the Biotic Baking Brigade had become the Myopic Baking Brigade.

The problem was not just who was getting creamed, but the creaming itself. Sure, pie-throwing can be good natured—like at a fundraiser at a county fair or a college food fight. It can also be hilarious, like the slapstick comedy of the Three Stooges or Charley Chaplin. But when done with malice, it can easily turn sour. I remember a nasty episode when San Francisco Mayor Willie Brown was pied by three people who held him responsible for policies that created more homelessness. One of the culprits was our friend Justin Gross. Justin was a sweet, gentle soul who cooked us vegan lunches once a week at Global Exchange and worked with Food Not Bombs. The mayor was hurt in the assault, and when the “piers” were tackled to the ground by security, one of them broke her clavicle. Justin was sentenced to six months in jail for battery.

When Sierra Club Director Carl Pope was pied, the tofu in the cream didn’t mollify him. “The pie has nothing to do with it,” Pope said bitterly. “It’s the fist behind the pie. It’s like being slugged.”

Now I know exactly what he meant. I often thought that if I was pied, I’d laugh it off. Big deal. A bit of cream in the face. But it felt like a punch in the sucker. It felt very violent. In fact, I am still shell-shocked. When people I don’t know approach me to say hello, I flinch and brace myself for a beating.

In the wake of the assault with a high-caloric weapon, I could have followed the footsteps of Willie Brown or Ann Coulter by pressing charges. I’d have a great case, because I have on videotape both the successful pieing and an unsuccessful and even more violent attempt hours earlier. But I wouldn’t do that. Why? I actually feel sorry for people who harbor so much resentment and come from a place of such anger. Perhaps these pie-throwers are wounded people who lack the essential ingredients of a fulfilling life—a supportive family and community that provides a healthy dosage of love.

I feel the love from my wonderful husband and two daughters. I feel the love from my colleagues at Global Exchange, where we’ve built an organization with 40 staff whose lives are dedicated to transforming the world for the better. I feel it from my sisters at CODEPINK, which now has 150,000 supporters, 250 local chapters, and a house in DC that serves as a hub of anti-war activism and a place that empowers new activists every day.

That’s my recipe for not only a healthy life, but my contribution to changing our world. I ask the pie-throwers, what’s yours?

Instead of packing a punch, why not come over for lunch? Let’s swap our recipes for change. And I’d be happy to bake you the dessert of your choice. May I suggest humble pie?

Medea Benjamin, cofounder of Global Exchange and CODEPINK is accessible, even to pie-throwers, at medea [at] globalexchange.org.