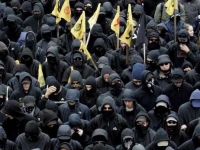 No G8
Heiligendamm Report Back

This year’s meeting of the Group of 8 (G8, the 7 richest nations in the world: Great Britain, United States, Germany, France, Japan, Italy, and Canada, plus Russia) was held in the resort of Heiligendamm, Germany from June 6-8. In response, tens of thousands of demonstrators arrived in the area in an effort to shut down the summit. The reasons for such a confrontation include the G8’s policies on aid to Africa, the propagation of neoliberal economic globalization, the neglect of the fight against AIDS, the inherent and rabidly undemocratic nature of the G8 itself, among many others. Read More
Related Categories: International | Fault Lines