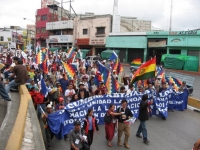 Guatemala City had never seen anything like it: thousands of Indigenous people from almost every country of the Americas coming together, celebrating their culture, and organizing resistance. This is the grand finale march on Guatemala City to top off the successful weeklong summit at nearby Iximché. The grey, suffocating streets are filled for once not with smog and gridlock, but with a blaze of color from the forest of rainbow colored flags and banners, and the sound of drums and pipes and maracas and the multitude of voices each with their own distinct language uniting to chant and sing together. Like the march of an army of the dispossessed—the invisibles—reclaiming the city of fear where once, not so long ago, they were hunted down, disappeared, and murdered with impunity by the state security forces.

“After more than 500 years of oppression and domination,” proclaimed the Bolivian speaker from the stage before the cheering crowd, “they have not been able to eliminate us. Here we are alive and united with nature. Today we recuperate together our sovereignty...Our task is to begin to govern ourselves.” Read More
Related Categories: International | Fault Lines