Add an Event
Newswire
Calendar
Features
Home
Donate
From the Open-Publishing Calendar
From the Open-Publishing Newswire
Indybay Feature
Publish to Newswire
Add an Event
Related Categories: International | Fault Lines
Indigenous Resurgence in Abya Yala
by Ramor Ryan (info [at] faultlines.org)
Saturday Jun 23rd, 2007 4:32 PM
As the historic march flooded into the old colonial central plaza, there was a moment of great jubilation. From the side streets flowed legions of people from the feeder marchers, swelling the ranks of the main body. As the rivers of indigenous marchers merged, a tremendous roar filled the air as hundreds of smiling faces greeted each other like long lost brothers and sisters re-uniting—which of course in many respects, they were. 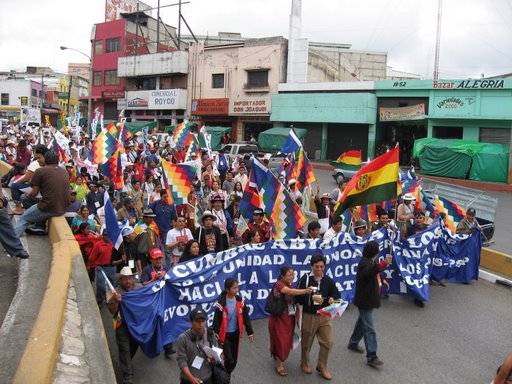