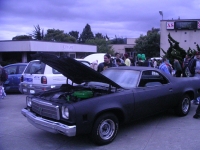 On April 19, City College of San Francisco celebrated Earth Day by showcasing alternative fuel and electrically powered vehicles on the school’s Ram Plaza. Among the line-up of vehicles was a biodiesel hot rod that some fellow CCSF students and I built in the school’s Automotive Department. The hotrod is a 1974 El Camino Super Sport that was originally gas powered with a 350 Chevy engine. We pulled the engine and replaced it with 6.2 liter GMC diesel engine and filled the tank with biodiesel.

The EPA saw what we did with the El Camino and decided to give the garage a $200,000 biodiesel grant. They considered it cutting edge, and the administration acted as though they were supporting our project. The Biodiesel Club was led to believe that the grant money would benefit the students, and we were asked to get the car ready for a press conference. Spending money out of pocket and backtracking on the project, both club members and faculty made the car picture-worthy. In the end the grant money was put in the pockets of the administrators, with a small portion to go toward a biodiesel workshop that CCSF students are not allowed to attend. Read More
Related Categories: San Francisco | Fault Lines