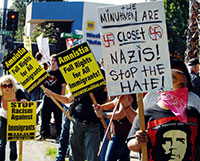 Immigrant rights activists gathered on July 28th at Fremont and Mowry Blvds. to counter the bi-weekly rally called by the racist East Bay Coalition for Border Security (EBCBS) which is looking to become an affiliate of the vigilante group, the Minutemen. Starting at 4:30pm, about 75 protesters claimed the intersection that in previous weeks, the racists had used to draw attention to their message of hate. By 5:20 or so, a couple of them showed up on a different corner, in front of the Valero gas station, holding signs and US flags. When the immigrant supporters crossed the street, the racists decided to leave.

The EBCBS, in an effort to hide the location of their demonstration from the anti-minutemen protesters, rallied a couple miles down Fremont Blvd in the Irvington neighborhood. By foot, bike and car, about 40 anti-minutemen protesters left Mowry Ave. and Fremont Blvd and went to the Irvington neighborhood (Fremont and Washington) to show solidarity with immigrants and route out fascism in Fremont.