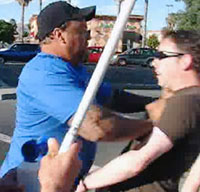 On July 14th, 25 protesters with the East Bay Coalition for Border Security, a racist, anti-immigrant group in Fremont that is seeking affiliation with the Minutemen, were met by twice as many counter-protesters at a rally in Fremont which takes place every other Friday during the summer. This was the third time the two sides had faced off this summer – the racists’ message of hate and xenophobia being challenged by the counter-protesters’ determination not to let them grow or intimidate immigrants and people of color in their own community.

For the first time, the counter-protesters were violently assaulted by the Minutemen wannabes and repressed by the Fremont police. As can be seen in a video taken at the event, a member of the EBCBS shoved and punched two of the anti-racist counter-protesters. This came after another violent altercation with a young Latino man.

The EBCBS will hold its next rally on July 28th in Fremont and once again we will be out there to protest them. Gather at 4:30pm at the corner of Mowry Ave. and Fremont Blvd. We want everyone to know that these racists do not reflect the views of most people in Fremont or the Bay Area and that we will not tolerate this kind of hate and violence in our own backyard. Read more