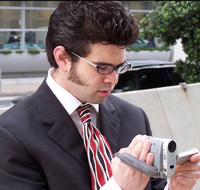 Josh Wolf was taken into custody today after a 9am court hearing on August 1st. He was found to be in contempt for exercising his first amendment rights and refusing to provide a federal grand jury with video footage he shot at the SF G8 protest last summer. He could be held until the grand jury expires next July. The Society of Professional Journalists has published a statement in support of Josh.

A press conference was held outside of City Hall at 1pm, and at 2:00pm, the SF Board of Supervisors was to vote on a resolution in support of Josh's case. Read more

It had widely been feared that Josh would be taken into custody during his July 20th court date, but the case was continued until August 1st. The National Lawyers Guild (NLG) believes that the grand jury is being improperly used to obtain materials which would normally be protected under California's Reporter Shield Law. Statement from the National Lawyers Guild

The US Attorney's Office is trying to force Josh Wolf to testify before the grand jury and hand over a video tape of a protest that occurred in San Francisco's Mission District last July. "My client's political activity and free speech activity in the Bay Area as a journalist and this subpoena, with its associated threat of jail time for noncompliance, has an incredible chilling effect on his and other journalist's freedom to gather and disseminate information of groups who espouse dissident beliefs," said his attorney. California's shield law, according to a recent court decision on the matter, "is intended to protect the gathering and dissemination of news." In that decision, the California Court of Appeals in San Jose confirmed that the law protected internet bloggers just as it protected corporate news reporters. Federal protections, however, are not as strong.

The Grand Jury Resistance Project reports that if Josh is convicted on these civil contempt charges, he could be jailed for up to 13 months. The GJRP believes that the grand jury to which Josh Wolf has been subpoenaed is part of a series of broad and unconstitutional federal investigations into anarchist and antiwar activity and other political movements that oppose U.S. policies. Most recently, they also called for the public to show support on August 1st.