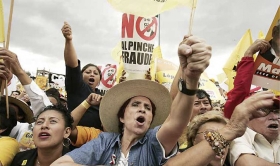 "No to the Damn Fraud": López Obrador the Likely Winner in Mexico
Presidential Election the Most Hotly Contested in Mexican History

The Mexican election of July 2 is the most contested presidential vote in Mexico’s history. The candidate of the leftist PRD, Ándres Manuel López Obrador, likely beat Felipe Calderón of the rightist PAN. However, Calderón has been called the winner in the mainstream press, by a margin of 0.6 percent. At a massive demonstration in the capital July 8 (the Mexican government estimated there were 280,000), protesters chanted “No to the damn fraud!” López Obrador told the crowd, “We are confronting a powerful group, economically and politically, that are accustomed to winning at all costs, without moral scruples. If there is not democracy, there will be instability.”

Narco News reported, "The perpetrators of this fraud, the PAN party, complained for decades about the very heavy-handed tactics used by the ruling PRI to rob elections from the PAN. But once in power, the PAN adopted those same anti-democratic tactics for its own use [to beat the PRD]." The accusations of the PRD over the election are wide-ranging: from interference by President Fox, distortion of information by the Federal Electoral Institute and statistical manipulation, to vote-shaving and disposal of ballot boxes in dumpsters. The PAN ran a campaign of fear, dedicated to painting a picture of López Obrador as danger to the economy, while attacking his supporters as street-fighters. Be that as it may, the future of the Mexican economy is in the balance, and resistance to the election fraud could develop into militant action by the PRD.

The Other Campaign initiated by the Zapatistas has been blamed by some in the PRD for being a spoiler in the election. Subcomandante Marcos said in the leftist daily La Jornada that the charge is “stupid,” saying the PRD won “by a wide margin” in the areas through which the Other Campaign traveled. The Other Campaign’s slogan was “If you vote or not, organize!” and the efforts of their movement will continue to expand beyond the election.

Lawyers for the PRD filed hundreds complaints with the Tribunal of the Federal Electoral Institute. The Tribunal must rule by August 31 on the validity of the election. A March for Democracy called by the PRD started heading for Mexico City July 12, and culminates July 16 in what promises to be an enormous demonstration in Mexico City, demanding a recount of all 42 million ballots. There is a sense in Mexico that the results could be overturned, and the country is waiting expectantly for the results of the struggle to give López Obrador his victory.