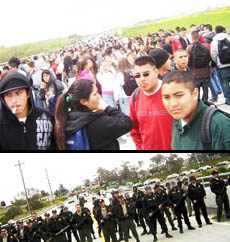 On Monday March 27th, word spread fast around high schools in the Pajaro Valley School District that students would be walking out of their classes at 11:00am in protest of anti-immigrant legislation known as HR 4437. The message of the students was that the United States is nothing without Mexicans and HR 4437 is nothing short of racist. Monday's local walkouts, including thousands of students, were at Watsonville HS, Pajaro Valley HS, Aptos HS, Alisal HS, and Alvarez HS. Student walkouts have erupted all of the state of California, but is also occurring in cities nation-wide. Read more

Audio: FRSC: Jenn and Ramiro of the Brown Berets discuss Student Walkouts, HR 4437 and more || Accounts of Police Violating Civil Rights of Students in Watsonville on 3/27

Student walkouts continued Tuesday in Watsonville, Salinas, and now Hollister. As with Monday, there appeared to be a large squad of riot police in Watsonville attempting to squelch student dissent. Reports also suggest that students may have halted traffic on Highway 1.

Soraya Hernandez, a student, said: "Watsonville High students walked out again today for the second time during our break time. A student posted a bulletin on a site which expressed their thoughts of the walk out and were very hurtful and expressed in an "angry" way [anti-immigrant]. Someone decided to print it and post around school which infurried student of immigrant desent. By this incident, many students were mad including myself which made us want to stop this and make a point... to make a statement about immigration. We [students] didnt mean to cause "violence" or "public disturbance" but yet of course there were a few break outs here and there that were made big deals of which trust me if you went to high school they would be NOTHING...cops got aggressive and so did some students. The point is the walk out, it meant something, or at least to me it did." Read more... 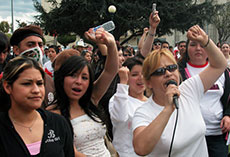 Photos and Reportback from Day 2 of the Walkouts: Watsonville High Walk Out

On Wednesday, March 29th, hundreds of students from Santa Cruz High, Santa Cruz Community, Habor, Aptos, Soquel and Cesar Chavez (Barrios Unidos) left class at 10:00am and marched to the Santa Cruz County Courthouse. They marched for immigrant rights and justice and against HR4437.

In Watsonville, supportive teachers and allies met after school on Wednesday to discuss creative and productive actions such as teach ins, panels, presentations, and community work as "consequences" for student actions. On Friday, March 31st, thousands of students from local schools, including Watsonville High, Pajaro Valley High, Aptos High and Renaissance High, marched and rallied against HR 4437 in Watsonville. In anticipation of the walkout, both Pajaro Valley High and Watsonville High decided to not hold classes in an effort to keep students safe. (