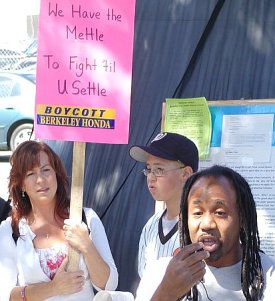 On June 1, 2005, the Doten family sold their Honda dealership after 40 years in Berkeley. The service department employees, mechanics, service writers, detailers and parts technicians were represented by the Machinists Union (IAM Local 1546) and Automotive Teamsters Local 78. The new owner told workers that he would recognize the union. Workers asked him to honor their old union contract, with a one-year freeze in wages, giving them time to negotiate a new contract. He refused. They asked him to maintain the current staff for a period of 100 days before making any decisions about which employees to keep or terminate. He refused. He replaced a 31-year employee and Honda-certified technician with a mechanic who just graduated from technical college and does not yet possess a journeyman card or his own tools. He replaced Doten's most experienced parts technician with a friend of his. He re-hired only one of the existing experienced service writers. None of the employees who clean and detail cars have been rehired and cars are being sent off-property for this work.

All of Doten's service department employees, whether rehired or not, have decided to take a stand against the owner's actions. They are filing unfair labor practice charges against the owners at the NLRB.