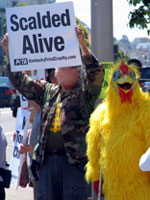 Bay Area Vegetarians (BAV) and other local grassroots groups are keeping the pressure on KFC for what activists say are well-documented practices of ongoing abuse to chickens. They claim chickens are routinely scalded alive, beaten and kicked. In addition, they say the chickens are pumped full of hormones and kept in crowded filthy conditions which frequently results in their inability to stand up or flap their wings. KFC has so far refused to implement comprehensive guidelines developed by its own animal welfare panelists to prevent these and other abuses. Until it does, activists everywhere are protesting. This weekend in the Bay Area, actions against KFC took place in S.F., Santa Clara, and other cities.