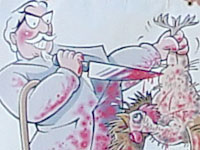 Almost two months ago, Kentucky Fried Chicken was one of the most protested chain stores targeted by animal rights activists (previous reports: 1 | 2 ). In response to the building public pressure, KFC entered into negotiations with PETA, People for the Ethical Treatment of Animals, and protests were suspended for a period of six weeks. PETA spokespeople now claim that negotiations with KFC have broken down, and they "still aren't planning to take the recommendations of their own advisors to eliminate the worst abuses of the chickens raised and killed for their restaurants". PETA is now calling for a "Month of Action Against KFC" and is offering free materials for groups that organize local demonstrations. KFC has come under fire because of their policies in regards to slaughtering, housing, and gathering the 800,000 chickens it processed every year. Read More