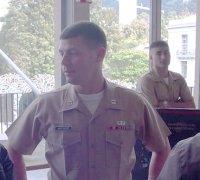 3/30/2005:The Associated Students of the University of California at UC Berkeley have unanimously passed a resolution denying military recruiters use of facilities and assets because of the military's discriminatory “Don’t Ask, Don’t Tell” policy. Student bill 20107, states that "the presence of military recruiters on campus violates the University of California’s own nondiscriminatory policy" and "calls on Chancellor Birgeneau, the UC-Berkeley administration, and the UC Regents to take measures to bar military recruiters from UC-Berkeley and throughout the UC system." The resolution goes on to state that the ASUC shall deny the use of ASUC facilities and assets to military recruiters and calls on the U.S. military to immediately revoke its discriminatory “Don’t Ask, Don’t Tell” policy.
Much of the success of this resolution can be attributed to the November 2004 FAIR v. Rumsfeld ruling by the Third Circuit U.S. Court of Appeals. The ruling states that universities may bar military recruiters from their campuses without risking the loss of federal money, which had been a major deterrent in anti-recruitment efforts.
In addition, the student senate passed a resolution calling for the withdrawal of troops from Iraq.
Read More | Past Counter-Recruitment Coverage: 1   2   3   4 | April 9th: Counter-Recruitment Conference