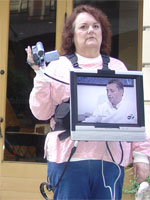 Despite the upcoming ban that goes into effect in California in 2012, foie gras is still being served at Aqua and other restaurants in the Bay Area. Foie Gras is produced through the forced feeding of ducks with high fat foods until their livers expand to up to ten times the normal size, sometimes even exploding. This is considered quite the tasty treat for upscale restaurant goers. Outside of the restaurant, In Defense of Animals (IDA) members show video of a chef who claims in a TV interview that the feeding tubes used to produce foie gras only broach the tips of the birds’ mouths. In the same video the chef is then shown graphic footage by the interviewer of what really happens when ducks have massive amounts of food being blasted down their throats. Read more