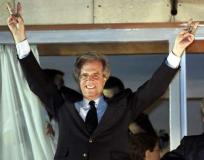 A coalition of guerrillas, socialists, communists, and social democrats are celebrating victory in Uruguay, with all exit polls predicting that Tabaré Vázquez, a doctor from Montevideo, won the national election held on Oct. 31; his two opponents have already conceded. The leftist coalition, Frente Amplio (Broad Front), has also achieved a strong majority of both legislative bodies. Uruguay's two traditional major parties have been defeated for the first time since independence from Spain in 1825; a proposal for water privatization was also defeated. Full coverage at Uruguay Indymedia