Add an Event
Newswire
Calendar
Features
Home
Donate
From the Open-Publishing Calendar
From the Open-Publishing Newswire
Indybay Feature
Publish to Newswire
Add an Event
RNC Coverage: Local Activist One of Five Charged After NYC Banner Drop
Operation Sibyl Drops Knowledge
"(It) was terrifying, but the way the country's going is terrifying, and I felt I had to make a statement." - Terra Lawson-Remer, Operation Sibyl

On Thursday, August 26, four friends from different walks of life took a deep breath and... jumped. Two of them literally. Months before, the team of compatriots, gripped by a sense of urgency and fear at the thought of another four years under the Bush administration, made the decision to unfurl a message that would strike at the hearts of millions of Americans - most importantly, those hanging on out on the fence, undecided about the role they will play this November. Cesar Maxit, 28, David Murphy, 31, Terra Lawson-Remer, 26, and the Bay Area's very own Becky Johnson, 25, took a courageous leap of faith last Thursday morning, when they scaled almost seven stories down the side of the Plaza Hotel in New York to drop some knowledge on the world at large. The architect, law student, seminarian and teacher call themselves Operation Sibyl, after an ancient Greek work for a fortune teller - and prophetize they did. The crew raised enough funds to rent a room at the Plaza, from which they began their operation at 5am on the 26th. At 6:15am they began rappelling from the 11th floor of the Plaza Hotel. After an excruciating three hours, during which local police were slow to respond, the group unfurled their banner at 9:30am, per their exacting calculations. With a bold arrow pointing backward labeled, "BUSH", and an opposite arrow pointing the way forward, labeled "TRUTH", the 2400 square foot banner presented a dramatic visual message that spoke volumes about the the past four years and the potential for four more of the same. 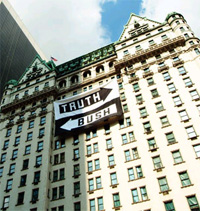 While the length of time from the beginning of the operation to the end speaks to the group's efforts to make safety a top priority, as well as a conscious effort to avoid property damage, the NYPD and the City Prosecutor's Office don't appreciate Sibyl's thoughtfulness. Becky Johnson even went as far as recommending to a policeman intent on getting them off the roof right away that he leave the intervention to trained emergency staff, as opposed to risking his safety and theirs. He ignored her suggestion - and then proceeded to stick his leg through a rooftop skylight, cutting his leg. This bit of clumsiness has skyrocketed the four's charges from misdeamonor offenses to outright Class D felonies, which could garner them up to 7 years in prison, should they be convicted. Operation Sibyl's lawyer, Gerald Lefcourt, calls the charges "bogus". In an interview with the SF Bay Area IMC, Lefcourt affirmed that this was obviously a calculated tactic to dissuade citizens from protesting and exerting their First Ammendment rights. He confirmed that at present, all four protesters are on equal footing, and there does not seem to be a move on the part of the prosecutor to single any one person out - especially as at least one member has a prior protest conviction. They are currently slated to appear before a Grand Jury on November 30, and Lefcourt says he is going to push for the 2 misdemeanors and 2 felonies to be dropped all together. "(We) are not trying for a downgrade - we want all the charges dropped all together." Read the Full Story

The SF Bay Area IMC will continue to keep you updated on the story as it unfolds. In the meantime, even though Attorney Lefcourt has graciously donated his services pro-bono, Operation Sibyl has already amassed a pile of bills, which are only an indicator of the ones that will continue to come after Lefcourt's time. Contributions can be sent to:
Operation Sybil, c/o Gerald Lefcourt, 148 East 78th Street, New York, NY 10021.
Contributions are not tax deductible.
PHOTOS: 1 | 2 | 3 | 4 | Democracy Now! interview w/ Lawson-Remer