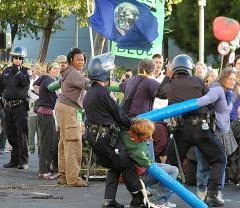 Amidst convention-goers and lines of riot police, hundreds of protesters disrupted the Biotechnology Industry Organization's annual convention this morning in San Francisco. Among the large variety of messages demonstrators brought to the conference, many demanded an end to corporate control of genetic code as "intellectual property". Protesters also held up wealth distribution, poverty and lack of access to basic medical care and nutrition as problems not being solved by Big Biotech's expensive products and R&D. Others railed against the loss of biodiversity, genetic contamination, unsafe food, and cancer-causing chemicals produced by the biotech industry, and the lack of labeling, safeguards or accountability in many sectors of the industry. 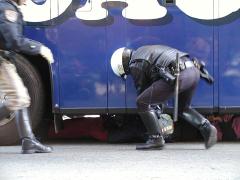 Protesters locked down in the street, formed a gauntlet outside the convention center, debated convention attendees, and in one case even darted under a bus of attendees, where the heavier-set officers were unable to extricate them. Attendees were escorted into the halls by riot cops who pushed and shoved activists out of their way. As police gave protesters free rein in the streets, demonstrators danced and chalked their messages for biotech junior executives peering down from the windowed convention hall. 32 arrests have been reported so far. Morning 6/8: Breaking News as it happened | Photos: 1 | 2 | 3 | 4 | 5 | 6 | 7 | 8 | 9 | Report Previous actions: Really Free Market | Racial Justice Rally (video) | Food Fight

Meanwhile in Georgia, anti-G8 marches took to the streets in Brunswick and Savannah. Atlanta Indymedia