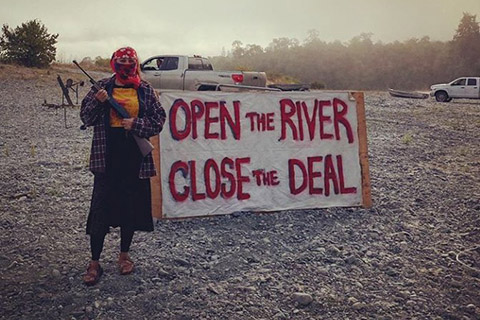 Four dams on the Klamath River have had devastating consequences for the environment, imperiled salmon, river communities and tribal people who have subsisted off of salmon since time immemorial. For over 20 years stakeholders have worked together in an agreement that would remove the dams and restore the Klamath River in what would be the largest river restoration project in history.

Billionaire Warren Buffet’s company Berkshire Hathaway's subsidiary PacifiCorp has the opportunity to move forward with dam removal and has collected hundreds of millions of dollars from shareholders and tax payers to protect its customers and shareholders for the purpose of dam removal. Now PacifiCorp is threatening to back out of the dam removal agreement.

Most experts view dam removal as the lynchpin for solving the water crisis that plagues the drought-prone Klamath Basin almost every year. Shallow, stagnant reservoirs breed toxic algae and decimate water quality, pushing Klamath River salmon to the brink of extinction. Decades worth of spawning gravel have accumulated behind the dams, preventing proper habitat conditions downstream. Anadromous species that historically migrated to the Upper Klamath Basin have lost access to over 420 miles of spawning grounds and habitat. Upriver Tribes like the Klamath Tribes of Oregon have not had access to salmon in over 100 years.