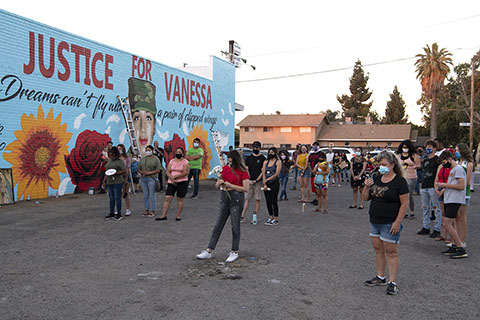 Around 75 people attended a vigil in Fresno on the evening of July 18 in honor of Vanessa Guillen. The vigil was held at 717 N. Fresno Street, where a mural featuring her likeness had just been completed. The mural is one of a number of Guillen that have been painted across the country. As part of the Black Lives Matter movement there have been several murals painted around Fresno recently.

Specialist Guillen was a 20-year-old soldier in the U.S. Army who was killed by a male soldier at Fort Hood, Texas, on April 22. Her remains weren’t found until June 30. The killer was apparently 20-year-old Specialist David Robinson. Robinson killed himself July 1 as investigators were on the way to speak with him. Robinson’s girlfriend Cecily Aguilar admitted she helped Robinson dispose of Guillen’s body.

Guillen told members of her family she was being sexually harassed. In the context of the Me-Too movement and the groundswell of protest against the killing of George Floyd, the public is making connections, and Guillen’s death has been met with great concern.