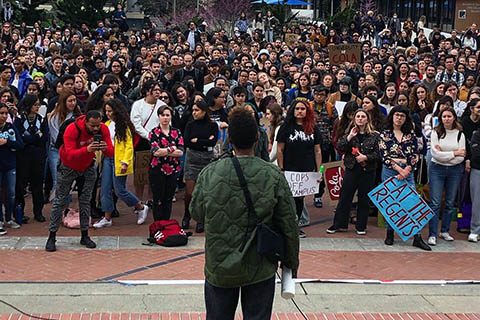 On March 5, UC Berkeley graduate student workers, undergraduate students and faculty joined together for a full day of work stoppage. The strike was organized by CAL COLA, an autonomous group of graduate workers and undergraduate students that began to organize in December 2019 in solidarity with the striking graduate workers at UC Santa Cruz. The Day of Action was part of the UC-wide Blackout Day in solidarity with Santa Cruz strikers who were fired last week, and organized independently of UAW Local 2865.

CAL COLA states, "We demand that the University of California Administration grants all graduate students across the UC System a Cost of Living Adjustment (COLA) proportionate to their local housing market. We demand that this occur without raising tuition and fees on undergraduates, without laying off workers, without slashing graduate admissions, and without any retaliation against students. We demand that the University stop behaving as a for-profit landlord - charging above market rate for university housing. We demand that the UC demilitarize their police force. We do not accept that the UC System 'does not have the money.' The UC has always found ways to fund initiatives it deems important in the past. If teaching is truly at the core of the UC's mission, it is high time that they start paying graduate students — who do the vast majority of teaching within the UC system — a living wage."