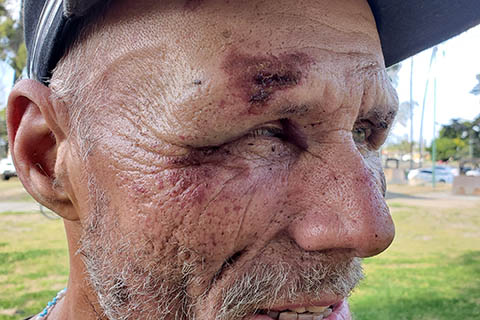 On February 24, a report emerged about officers from Fresno Police Department's Homeless Task Force assaulting a homeless man who they were attempting to evict from an encampment. Dez Martinez, an advocate for homeless people, says that this is not the first time something like this has happened.

The brutalization happened in Fresno on February 21 at a homeless encampment near West Avenue and Freeway 180. As David — the homeless person in the photo — was attempting to say "my advocate is on her way," he was thrown to the ground. After the Sargent slammed him to the ground, David was punched and all he could remember was getting hit multiple times and kicked in the head by all four officers.

Related Features: Fresno's No Camping Ordinance Criminalizes Homeless People | What It Is Like to Be Homeless in Downtown Fresno