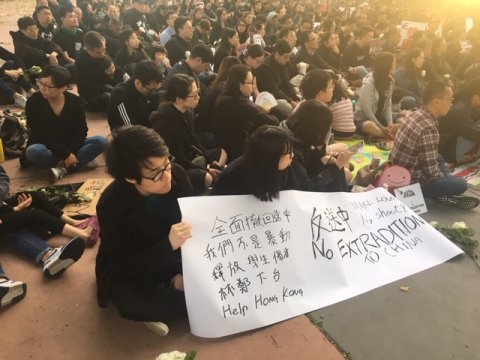 On June 17, at demonstrations that drew up to two million people, protesters in Hong Kong continued demands that the government withdraw an extradition bill they fear would allow people to be sent to the mainland for actions disapproved of by Beijing. Protesters insisted that police be held accountable for brutal tactics at demonstrations held earlier in June as well.

In the Bay Area cities of Palo Alto and San Francisco, hundreds demonstrated in solidarity with activists in Hong Kong. In San Francisco on June 9, protesters marched from Portsmouth Square to 130 Montgomery where they filled the street outside the Hong Kong Economic and Trade Office. On June 15 in Palo Alto, approximately 800 people, mostly in black, listened to speakers who said that although the semi-autonomous enclave’s Chief Executive indefinitely shelved the bill, continued demonstrations are necessary. Some of the Palo Alto demonstrators carried white flowers to commemorate the death of a man consider to be a martyr in the cause, a 35-year-old who committed suicide at a Hong Kong protest earlier the same day.

Hong Kong is known as a Special Administrative Region of China and has its own code of laws and legal system written into the Chinese constitution. Beijing sympathizers say the protests are being presented by Western governments and media as if demonstrators are reacting to a totalitarian noose around a free and democratic people of Hong Kong. They argue that the bill actually represents a fairly limited change. Others feel the giant, largely youth-led demonstrations reflect the fear that the proposed bill will allow extradition proceedings to mainland China, enabling Beijing to seize political dissidents.