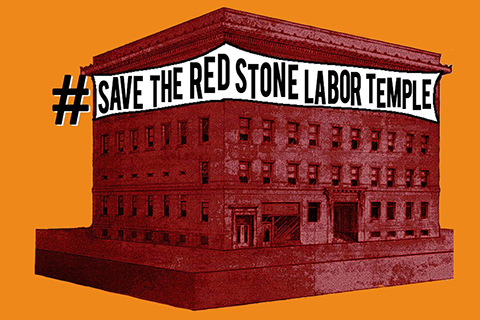 For more than a century, the Redstone Labor Temple has served as a hub for labor, social service, and non-profit community groups in San Francisco. It was an epicenter of organizing for the San Francisco General Strike in 1934, and home to the first all-women's union. Since 1968, the building has been a center for social service organizations and non-profit community groups, occupying some of the last affordable space in the Mission.

The owner of the building wants to sell and is asking for $25 million. Documents in the city Assessor’s Office show that it’s assessed at a little more than $2 million. The Mission Economic Development Agency wants a chance to buy it. Negotiations continue and MEDA has made a final offer of $18 million. At the price the owner wants, all of the leases would rise dramatically and existing tenants would, in all likelihood, be displaced.

On 6pm, Wednesday, February 27, organizers are holding a rally and community event to honor 104 years of economic and social justice at the Redstone and to work for a community solution. The tenants of the Redstone Labor Temple are committed to keeping the building an organizing center for both the Mission neighborhood and city-wide.