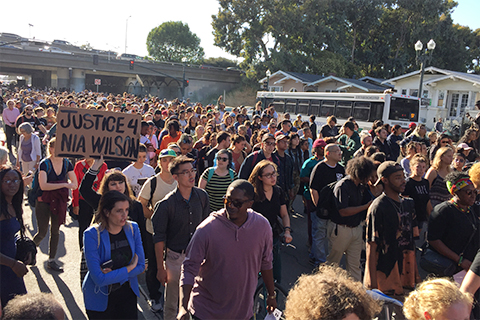 On July 22, hundreds attended a vigil-turned-protest for two Black women stabbed at an Oakland BART Station. Nia Wilson, 18, was stabbed to death the previous evening while standing on the platform of the MacArthur BART Station in North Oakland. Her older sister Latifah was also stabbed, but survived the attack. Wilson described a harrowing scene of witnessing her younger sister being slain. The Wilson’s father, Ansar Muhammad, pleaded for justice for his daughters.

The vigil began near the MacArthur BART gates with chants of “No Justice! No Peace!” and “Justice for Nia!” Speakers called on the crowd to take action to defend and protect Black women, and support the grieving family of the Wilson sisters. As demonstrators marched from the murder scene towards downtown Oakland, BART police announced an anonymous tip led to the arrest of John Cowell at the Pleasant Hill BART Station.

Activist and Oakland Mayoral candidate Cat Brooks said the attack was not “random,” but part of the year-long invasions by white supremacists and fascists coming to the Town. The stabbing occurred on the eve of a planned white supremacist “Proud Boys” gathering scheduled for Berkeley on August 5. At one point during the march, protesters chased a group of men identified as white supremacists. Witnesses said protesters fought with the men until the police stepped in. Police escorted at least one alleged Proud Boy from the scene. Police also arrested a Black male demonstrator. Police scuffled with protesters while attempting to lead the patrol car away. Some protesters threw bottles and other objects at police.