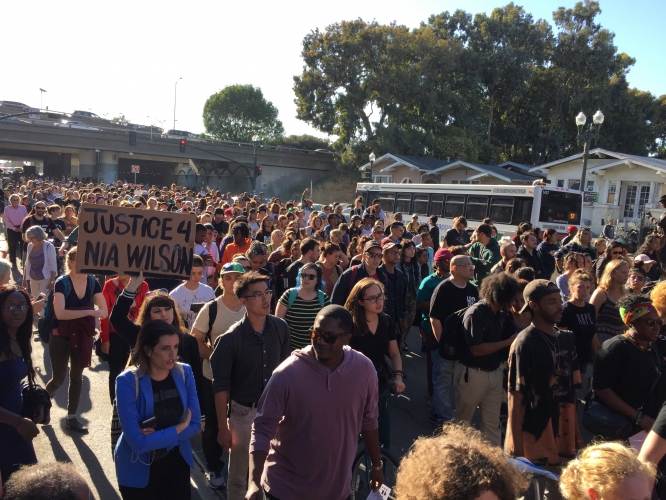 Nia Wilson, 18, was stabbed to death on Sunday evening while standing on the platform of the MacArthur BART Station in North Oakland. Her older sister Latifah was also stabbed, but survived the attack. Wilson described a harrowing scene of witnessing her younger sister being slain. The Wilson’s father, Ansar Muhammad, pleaded for justice for his daughters.

As news broke Sunday evening, the suspects initial description was only that he was a white male. Some 12 hours later on Monday afternoon, BART tweet-released photos of the alleged stabber, 27-year-old John Cowell with the message, “RIP Nia Wilson. We will bring this suspect to justice.” At a press conference, BART’s Police chief called the attack “vicious.”

As demonstrators marched from the murder scene towards downtown Oakland, at 6:45pm on Monday evening BART police announced an anonymous tip led to the arrest of Cowell at the Pleasant Hill BART Station.

Cowell is was booked into Alameda County’s Santa Rita Jail shortly before midnight.

The vigil began near the MacArthur BART gates with chants of “No Justice! No Peace!” and “Justice for Nia!” Speakers called on the crowd to take action to defend and protect Black women, and support the grieving family of the Wilson sisters.

Activist and Oakland Mayoral candidate Cat Brooks said the attack was not “random,” but part of the year-long invasions by white supremacists and fascists coming to the Town. The stabbing occurred on the eve of a planned white supremacist “Proud Boys” gathering scheduled for Monday and August 5.

The attack on the Wilson sisters was also an example of the violence experienced by Black girls in Oakland everyday, Brooks said. From girls being trafficked, or “pimped” at young ages in the “school-to-track pipeline”, to sexual assault by police officers, “We gotta talk about Black girls, and Black women, and Black babies,” Brooks said. “Black women are the matriarchs of society. If we are not taking care of Black women, we are not taking care of society.”

Brooks added, “If a Black man had stabbed a white little girl, he would already be in custody.”

Black communities cannot depend on the police, scholar-activist Ameer Loggins said, especially considering BART Police’s history of violence. “The same people we asking to find dude is the same one’s that killed Oscar Grant,” he said. Earlier this year, BART Police officer Joseph Mateu shot and killed Sahleem Tindle in West Oakland. A few years ago, teenager Nubia Bowe’s was beaten by BART Police, allegedly because she was dancing on a train.

“What we gone do to protect each other?” Loggins asked. He also encouraged attendees to donate to the family’s GoFundMe. “As we are looking for the white boy that did this, their family is mourning and has to plan a funeral.”

A tension between what could and should be done surfaced between some speakers and members of the crowd. Some debated whether or not it was a time for prayer, for marching, or chanting. “We need to do it all,” Tur-Ha Ak of Community Ready Corps said. “Our safety is our responsibility.” Community Ready Corps encouraged attendees to participate in self-defense trainings, noting that white supremacists across the nation are currently are training for attacks like those on the Wilson sisters.

He also said there was no distinction as to whether the attack on the Wilson sisters was racist. “Is it a white supremacist attack or some random white dude?” Ak asked at the rally, echoing questions raised over the past 24 hours. “It’s all the same thing,” he said.

At least 600 people attended the vigil and march. Going east on 40th St from MacArthur BART, the group marched south on Telegraph Ave towards downtown Oakland. The march ended at the intersection of 17th and Telegraph in front of Make Westing, the announced location of a gathering of the “Proud Boys.”

Around 7:30pm, protesters chased a group of men protesters identified as white supremacists to 19th and Broadway. Witnesses there said protesters fought with the men until the police stepped in. Police escorted at least one alleged Proud Boy from the scene.

Police also arrested another Black male demonstrator, although other protesters attempted to stop that vehicle from leaving. Police scuffled with protesters while attempting to lead the patrol car away. At least two small explosions were detonated, but it is unclear if protesters set off the explosive or if police deployed tear gas. Some protesters threw bottles and other objects at police.

Media reports of the attack have already received scrutiny. Some have criticized the narrative that the attack was “random.” Considering the rumoured white supremacist gathering, some suggest the Cowell targeted the Wilsons because they were Black women. The march’s theme was #SayHerName, a hashtag that emerged three years ago to highlight violence against Black females. Oakland Mayor Libby Schaaf imposed a protest curfew in 2015 on the night of the first #SayHerName protests.

Information released by police and media reports refer to Cowell as a “transient” and “parolee” with a history of criminal charges. He has not been directly linked to any white supremacist group yet.

Reports on social media of a second suspect have not been confirmed.

Others have criticizing KTVU for publishing a photo of Nia Wilson cropped to appear she was holding a gun. Twitter users have pointed out it the gun is actually a phone case. KTVU was under fire in 2010 for its seemingly favorable coverage of former BART Police Officer Johannes Mehserle prior to his. BART also announced suspects in two other homicides that occurred on BART this past week.

Cowell is scheduled to be arraigned on charges of 1st Degree Murder and Assault with a Deadly Weapon on July 25 at Wiley W. Manuel Courthouse in downtown Oakland. 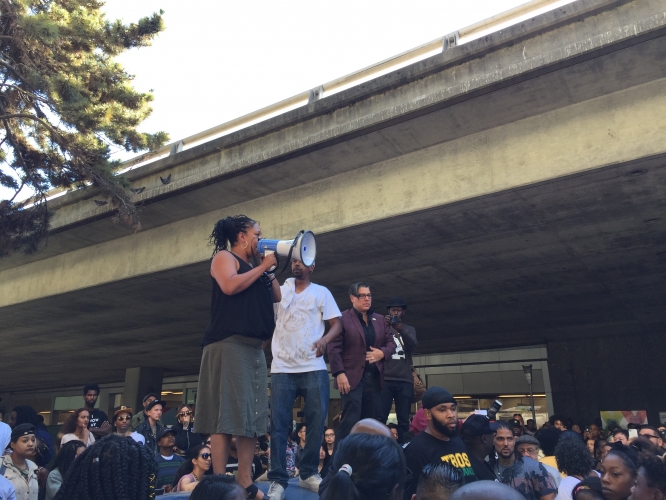 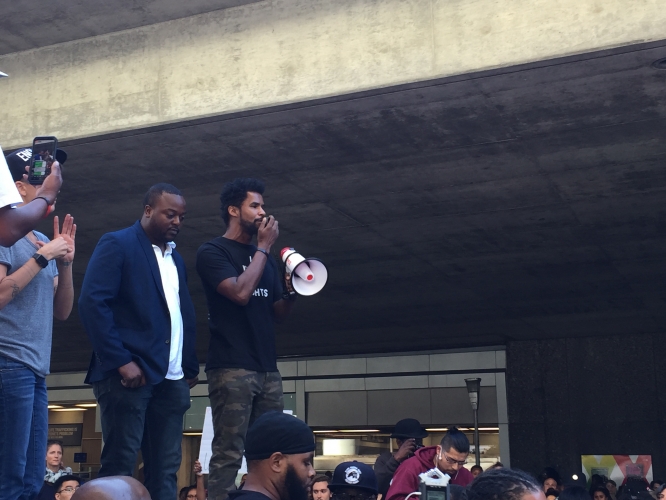 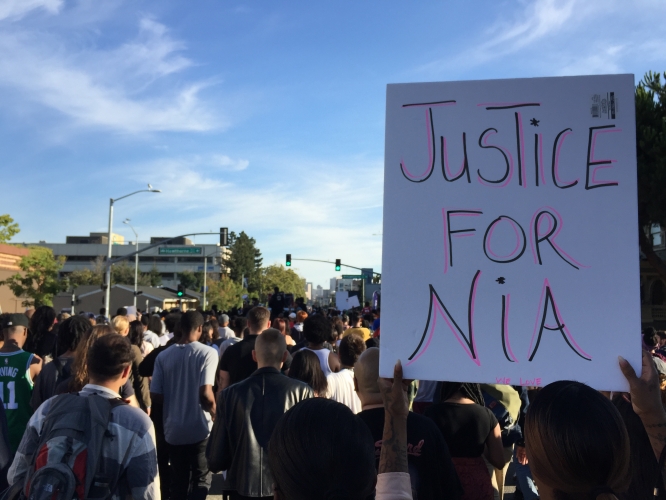 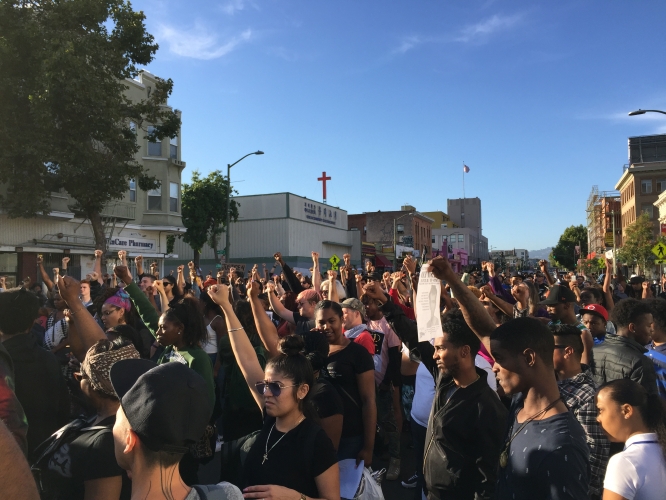 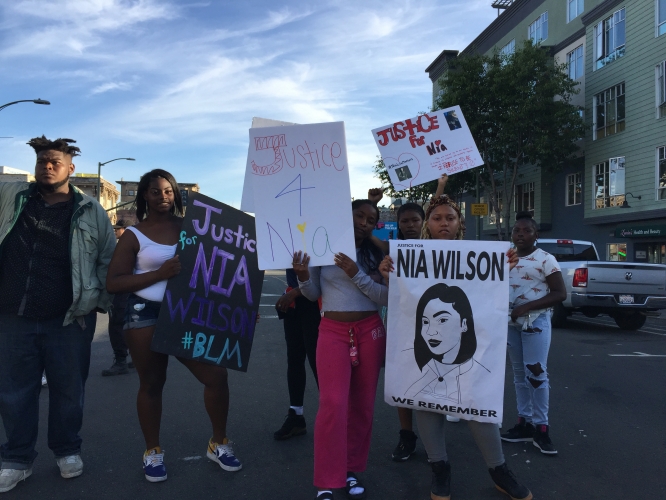 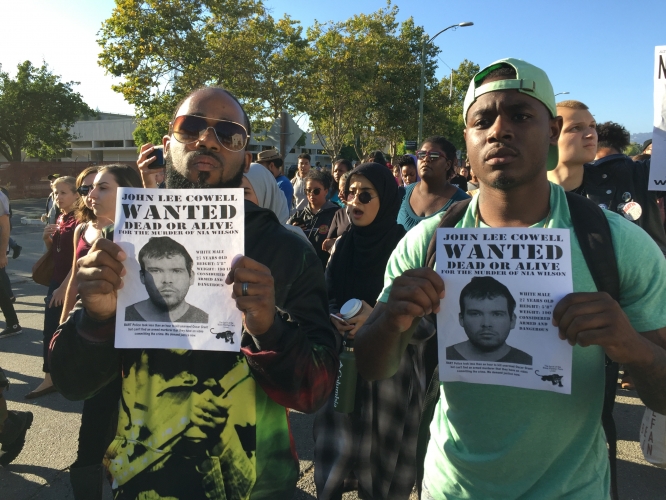 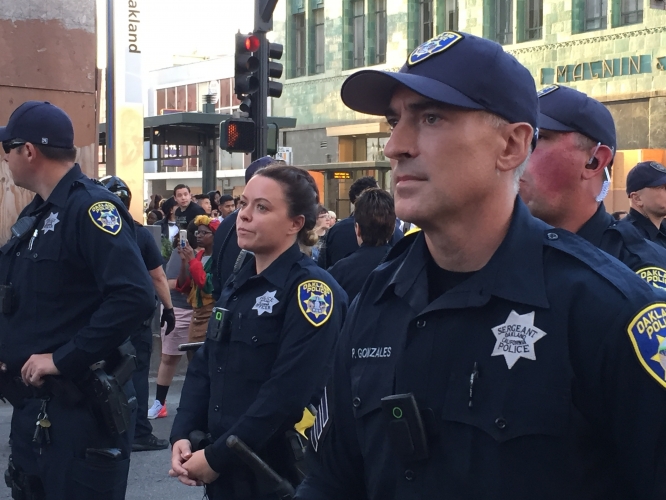 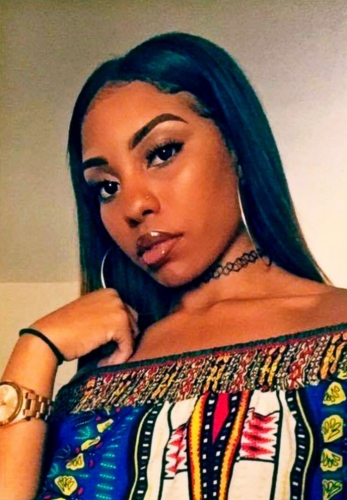 original image (689x992)
Stand up for Black women in Oakland and across this country!
Add Your Comments
LATEST COMMENTS ABOUT THIS ARTICLE
Listed below are the latest comments about this post.
These comments are submitted anonymously by website visitors.