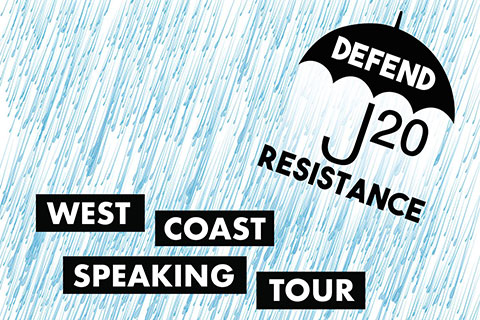 Defend J20 Resistance writes: On January 20, 2017 at the massive protests in Washington DC against Trump’s inauguration, militarized police attacked and mass-arrested over 200 protestors at an anti-fascist, anti-capitalist march, charging 214 of them with an unprecedented eight felonies. The first trial against 6 defendants ended with a verdict of not guilty on all charges, forcing prosecutors to drop charges against 129 of the arrested. However, the state is now doubling down against 59 remaining defendants.

In this touring presentation, you'll hear an overview and critical analysis of the case this far, highlighting its role and significance in the changing landscape of political repression in the United States. From the broad use of conspiracy law to criminalize all aspects of protest organizing to the dramatic victory against the state in the first trial this past December, the case offers insights into strategies for repression in the new administration, connections between different targeted social movements, and the potential of collective defense to effectively defeat the government's efforts.