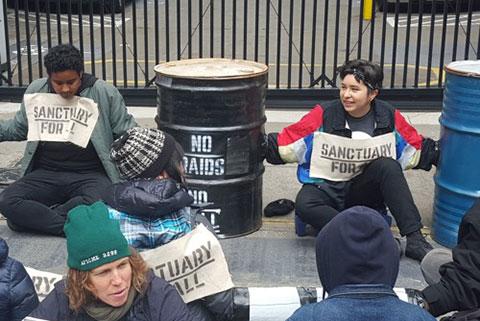 Hundreds of immigrant rights activists, including many students, unionists, and other allies, surrounded the Immigration and Customs Enforcement (ICE) building in San Francisco to disrupt ICE's daily patterns of mistreatment and dehumanization. Increased ICE activity has been reported throughout the Bay Area, the Central Coast, and in the Central Valley.

Reports from rapid response networks confirm that ICE agents have recently arrested hundreds of people in cities including Monterey, Oakland, Fresno, Napa, San Francisco, Sacramento, Santa Clara, and Salinas. Advocates say the crackdown is unconstitutional and that the Trump Administration is retaliating against California for its sanctuary status.

The ACLU of Northern California reports that contrary to statements provided by ICE, agents are aggressively intimidating families in their homes and using tactics of racial profiling to detain people in public spaces. They urge everyone in the state to know their constitutional rights, including the right to remain silent and the right to not open the door unless agents have a warrant signed by a judge.

Angelica Salceda, an ACLU of Northern California attorney states, "it appears that ICE selectively targets Latino neighborhoods, subjects people engaged in innocent activities to coercive questioning, and tricks people into opening their doors by misrepresenting themselves as local police."

ICE Out of CoCo: Contra Costa Responds with Power not Panic! |