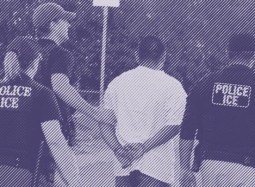 Contrary to statements provided by ICE, agents are aggressively intimidating families in their homes and using tactics of racial profiling to detain people in public spaces.

Reports from rapid response networks suggest that ICE enforcement is terrorizing communities of color. The targeting of cities and states that refuse to use their limited resources to fuel the Trump administration’s deportation machine is cruel and inhumane.

In many of the arrests reported so far, people opened their doors for ICE and answered questions. We urge everyone in California to know their constitutional rights, including the right to remain silent and the right to not open the door unless agents have a warrant signed by a judge. We urge people not to answer questions, and not to sign anything without speaking to an attorney.


"In all of its immigration enforcement activities, ICE must abide by the U.S. Constitution which guarantees basic rights to everyone in the United States. Yet it appears that ICE selectively targets Latino neighborhoods, subjects people engaged in innocent activities to coercive questioning, and tricks people into opening their doors by misrepresenting themselves as local police.

"The people of California should make sure they document any interactions with ICE agents and call the rapid response hotlines to report activity.

"Together we must resist this blatant racism. We need strong families, not families torn apart by deportation. We need communities that trust each other, not communities living in fear of police every second of the day.

"Reports of abusive tactics by ICE are nothing new, they are part of a pattern of fear-mongering and retaliation. We will do everything we can to protect community members from federal abuses of power."


Know your rights if ICE confronts you:
https://www.aclunc.org/article/california-ice-raids