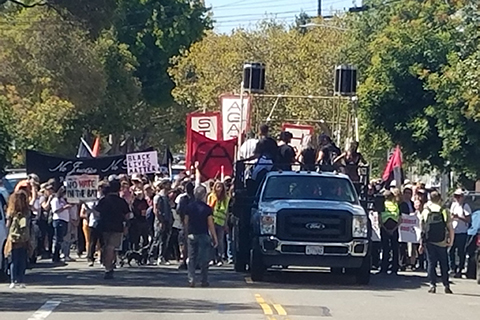 As a show of strength and unity against the white supremacists across the nation attempting to capitalize on the racist Trump presidency, the Anti Police-Terror Project proactively called for a "No Hate in The Bay: March Against White Supremacy," announced at the tail end of a weekend of anti-fascist counter-demonstrations in late August. On September 23, hundreds of anti-racist activists rallied and marched through the streets of Berkeley, declaring that blatant fascists and neo-nazis will never find a home in the Bay Area. Upbeat and greeted by an enthusiastic crowd, Chelsea Manning made a surprise appearance at the rally on the edge of the UC Berkeley campus, barely four months since she was released from prison.

Separately, Berkeley Patriots, the UC Berkeley student group behind "Free Speech Week," announced the day before it was supposedly set to begin that all events had been cancelled. Nevertheless, white supremacist provocateur Milo Yiannopoulos, who had glommed onto the Berkeley Patriot non-event, said he would still make an appearance on campus on September 24. Yiannopoulos and his supporters were outnumbered and couldn’t be heard over the shouts of anti-fascist protesters. Yiannopoulos was at UC Berkeley only 20 minutes before quickly exiting the campus flagged by supporters turned bodyguards.

We Got This: Chelsea Manning Speaks Out at March Against White Supremacy |

Behind Every Fascist, A Liberal: Report From Students At UC Berkeley |

No Hate in The Bay: March Against White Supremacy |

We Are The Majority! We Must Defend Ourselves!

Related Features: Ban Lifted on Berkeley Police Use of Pepper Spray | Nazis Doxxing, Stalking, and Threatening Movement Allies in the National Lawyers Guild | Corporate Media Attacks Antifa Weeks After Ridiculing Trump for Blaming "Both Sides" | White-Supremacists' and Other Fascists' Return to the Bay Area Fizzles in SF and Berkeley