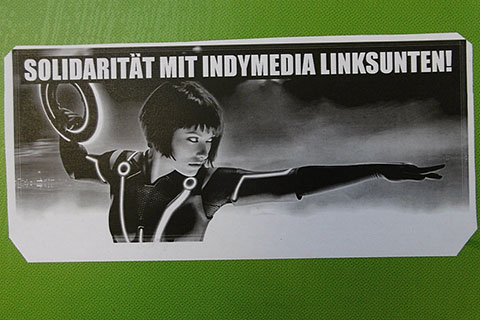 Solidarity with Linksunten Indymedia
Repression of Independent Media Won't Silence Us: Not in Germany, Not Anywhere Else

Linksunten.indymedia.org, the main independent media website in Germany, was banned by the German government's Ministry of Interior on August 25. Maintaining the website and using its logo are now considered criminal offenses in the country. Linksunten volunteers are being prosecuted as a "club," which means that administrators are considered responsible for everything that has been published. Administrators are also being accused of being members of a terrorist association.

Coordination des Groupes Anarchistes writes: This represents a new step in the repression of our activities and ideas in Europe. The last time something of this significance occurred was in 1995, when the German central power banned the newspaper "Radikal", which sparked many demonstrations all over the country, especially in Hamburg. In France, even though some music bands and anti-authoritarian information websites have been threatened for their lyrics or articles, we have never experienced such brutal repression against our means of expression and communication. This attack against a radical and anti-authoritarian information platform should remind us of the need to pay special attention to the defense of our means of communication in front of State repression.

Germany Indymedia is collecting donations in support of Linksunten Indymedia.

Not in Germany, Not Anywhere Else: Repression Can’t Silence Us! | Call for Donations and Demonstrations in Support of Linksunten Indymedia

Related Feature: German Government Shuts Down Linksunten Indymedia: What It Means and What to Do