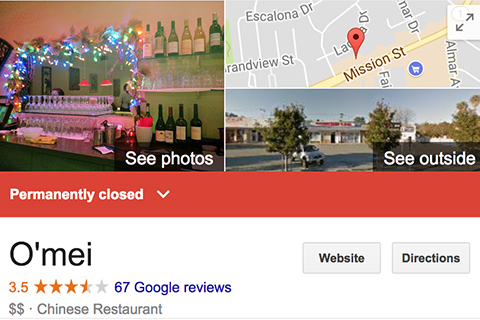 Indybay investigative reporter Lynda Carson wrote a piece shining light on David Duke's political donors in Northern California, publishing a second report on supporters in Minnesota, Massachusetts, Maryland, and beyond. One of those named was Roger F. Grigsby, owner and founding chef of O'mei restaurant in Santa Cruz. Negative reviews for the restaurant quickly began to pile up online, calling out Grisby for his support of David Duke. Patrons boycotted, employees refused to work, and after being in business for 38 years, O'mei was closed for business within a week of the Indybay article first appearing.

While the note left on the front door of O'mei says the restaurant was only closed "for now," it seems unlikely ever to reopen given Grigsby's response to the growing media firestorm. In an email to San Francisco CBS affiliate KPIX, Grigsby wrote, "We are just a token in a much larger process of terrorizing white European Americans into silence in what has become known as the 'war on whites.' My campaign contribution was to one of the men supporting European civil rights."

The ripple effect of outing David Duke supporters continues to spread. In Minneapolis, Clubhouse Jäger owner Julius De Roma was also called out for a $500 donation to David Duke's 2016 Louisianna Senate campaign. Follow-up articles added pressure over the donation in City Pages, the alternative weekly for the Twin Cities, as well as corporate media outlets including Fox, MSN, CBS, and The Star Tribune. Employees of Clubhouse Jager quit, a well-known DJ pulled his shows from the popular nightclub, and the Huge Improv Theater, a tenant of De Roma's, issued a statement: "we would like to formally tell Nazis and the KKK that they can fuck straight off." Clubhouse Jägerwas closed for business as of September 1 after the entire staff quit.