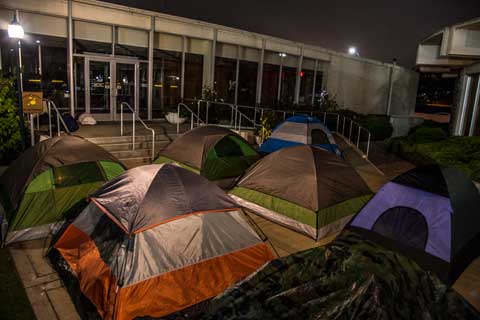 In the wake of the Chinatown homeless sweeps that displaced hundreds of people in downtown Salinas in March of this year, a small but thriving tent community has established itself at Salinas City Hall, where a group has been camping out every night for over four months.

"You can call it a sort of silent protest," said Van Gresham as he sat reading near his tent, which was located on the walkway outside of the city council rotunda. "We're hoping they will give us a place to go," he said. Gresham, who is without fixed housing, is a member of the Monterey County Homeless Union, a coalition of unhoused and housed community members who are organizing the campouts at city hall.

Individuals first started sleeping at Salinas City Hall on March 22, the night before the scheduled sweep of the homeless community in the Chinatown area was to begin. The sleepout was organized to build support for an action organized by the homeless union to physically block city work crews from evicting homeless residents of the area, and to prevent the removal of their possessions.

Homeless sweeps in Chinatown have been conducted by the city on a regular basis in the past, but community members knew this sweep would be different due to the recent passage of an anti-camping ordinance by the Salinas City Council that now allows for the city to quickly remove "bulky items" stored on public property. Additionally, the new ordinance outlaws setting up tents on public property between the hours of 6am and 6pm.