Add an Event
Newswire
Calendar
Features
Home
Donate
From the Open-Publishing Calendar
From the Open-Publishing Newswire
Indybay Feature
Publish to Newswire
Add an Event
Related Categories: Santa Cruz Indymedia | Government & Elections | Health, Housing & Public Services | Police State & Prisons
Following the Chinatown Homeless Sweeps, A New Tent Community Thrives at Salinas City Hall
by Alex Darocy (alex [at] alexdarocy.com)
Tuesday Aug 2nd, 2016 6:03 PM
In the wake of the Chinatown homeless sweeps that displaced hundreds of people in downtown Salinas in March of this year, a small but thriving tent community has established itself at Salinas City Hall, where a group has been camping out every night for over four months. [Top photo: Salinas City Hall on the evening of July 30. Scroll down for more photos.] 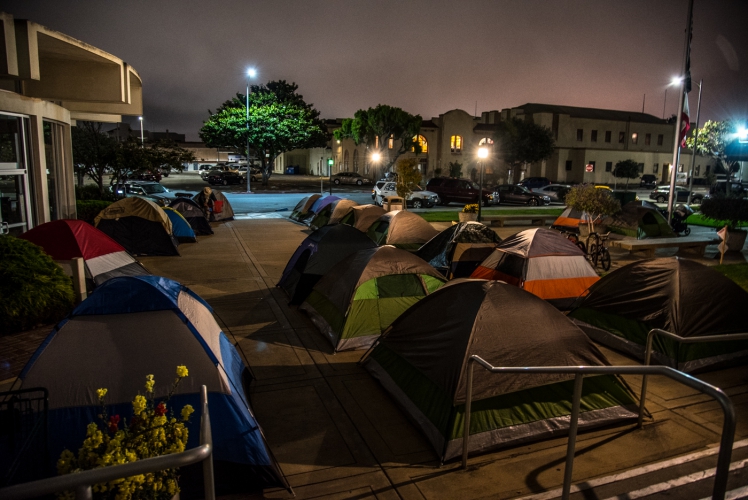 original image (1400x935)
On the evening of July 30, 20 tents were set up around the courtyard area of Salinas City Hall, and several people were sleeping out in various locations without tents.

"You can call it a sort of silent protest," said Van Gresham as he sat reading near his tent, which was located on the walkway outside of the city council rotunda.

"We're hoping they will give us a place to go," he said.

Gresham, who is without fixed housing, is a member of the Monterey County Homeless Union, a coalition of unhoused and housed community members who are organizing the campouts at city hall.

He is also the Editor of Voices of the Street/Voces de la Calle, a bilingual newspaper dedicated to homeless and social justice issues in the Salinas area. Gresham has been living in a tent since the city impounded the recreational vehicle in which he was sleeping in the Chinatown area. The vehicle is registered and up to date with all state regulations, he says, but the fees the city has levied against it have been so high he is unable to pay them.

Individuals first started sleeping at Salinas City Hall on March 22, the night before the scheduled sweep of the homeless community in the Chinatown area was to begin. The sleepout was organized to build support for an action organized by the homeless union to physically block city work crews from evicting homeless residents of the area, and to prevent the removal of their possessions.

Homeless sweeps in Chinatown have have been conducted by the city on a regular basis in the past, but community members knew this sweep would be different due to the recent passage of an anti-camping ordinance by the Salinas City Council that now allows for the city to quickly remove "bulky items" stored on public property. Additionally, the new ordinance outlaws setting up tents on public property between the hours of 6am and 6pm. Prior to the passage of ordinance 2567, there were no restrictions placed on the erection of tents on public property, and outside of the city parks, Salinas did not have any ordinances that directly addressed camping on city property.

Chinatown residents, supported by the protesters, were able to prevent the homeless sweep from proceeding on March 23, however work crews arrived the next day with the police, and the homeless tent community in the Chinatown area was eventually cleared.

On the day of the attempted sweep on March 23, Jill Allen, the Director of Dorothy's Place, announced publicly in Chinatown the organization's response to the sweeps, which was a commitment to house 200 people within 90 days. Dorothy's place hosts a transitional residence and a women's shelter in Chinatown, and provides hot meals through "Dorothy's Kitchen," in addition to hosting a health center and as a drop-in center.

A week later, the Monterey County Homeless Union announced they would be camping out every night at city hall until their demands were met. Their primary demands were that Jill Allen live up to the commitment to house 200 people by June 20, and that the city repeal ordinance 2567. Also included in their list of demands was the expansion of homeless services programs around the world, and a safe place (building or lot) in every city for homeless individuals to stay without punishment. The homeless union also put out a call for the donation of tents, sleeping bags, blankets, and pillows.

Gresham said there have been very few problems or security issues in the four months the tent community has located itself at city hall.

"I would consider it a safer haven," he said. "I think some of the women appreciate that."

Gresham said the homeless union was hoping to obtain a temporary permit to establish an officially sanctioned tent city in Salinas.

He said during the four months they have been at city hall, the space has been kept clean, and with very few exceptions, people have followed the city's new ordinance and have packed up the tents by 6am each morning.

On June 20, the homeless union organized a press conference at city hall to denounce Jill Allen and Dorothy's Kitchen for not living up to the commitment to house 200 people.

According to a press release from the homeless union, Dorothy's Place is, "almost the only point of entry into the HMIS database system to connect people with housing availability within Monterey County through the current list of service providers."

They say the Dorothy's Place caseload is basically at capacity, and the process of housing people has been particularly slow because, "there is not a ready accessible inventory of placements available for people who would be a good fit."

The city of Salinas does offer additional shelter services, such as the Warming Shelter program during wintertime, but those services don't offer the same flexibility in lifestyle that is possible within a tent community, according to Gresham.

"Warming shelters don't offer enough personal liberties," he said. "It's better to be able to come and go, and not lose your freedoms because you are looking to stay warm."

Gresham also noted that within the existing services provided by governmental agencies, "there's almost no representation by the homeless guy himself."

He's hoping that official support for a homeless tent community, and some funding from the city, would change that.

"We're hoping as a peer group we can regulate ourselves," Gresham said. "At least we would be able to represent ourselves."

As for the future, Gresham said the Monterey County Homeless Union is also looking to expand the union to other cities, and more supplies are always needed. 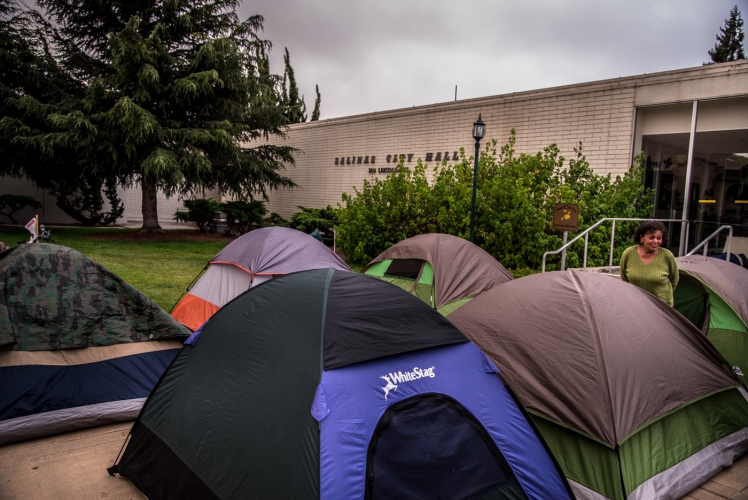 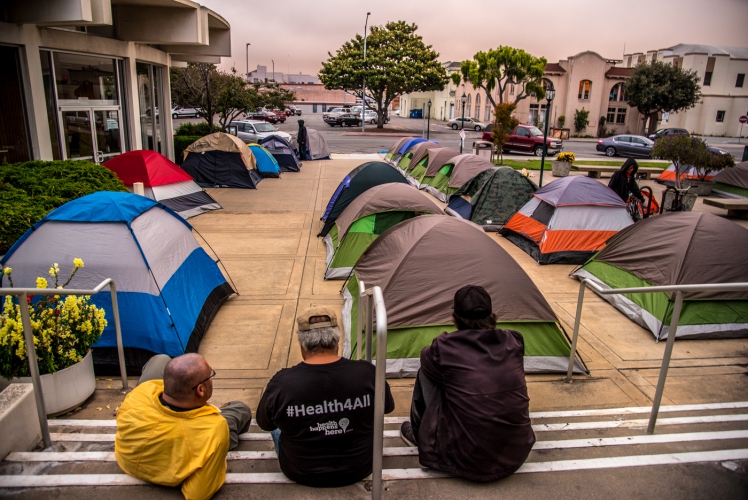 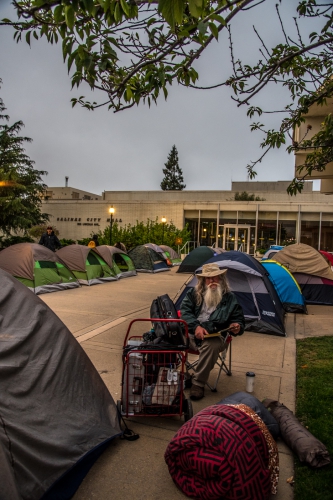 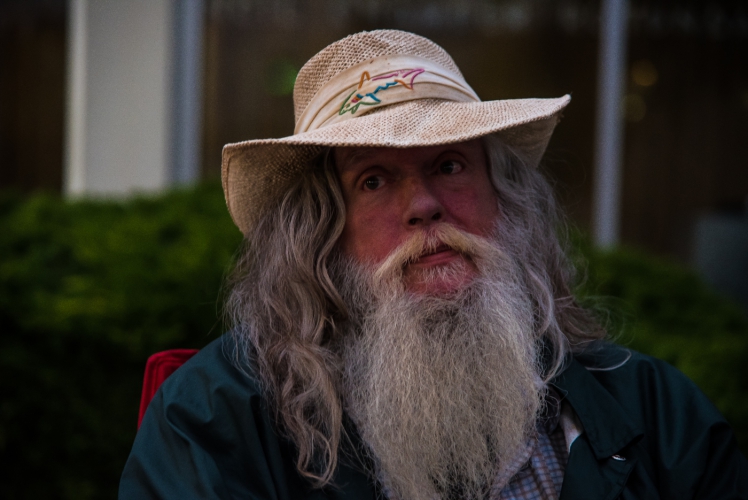 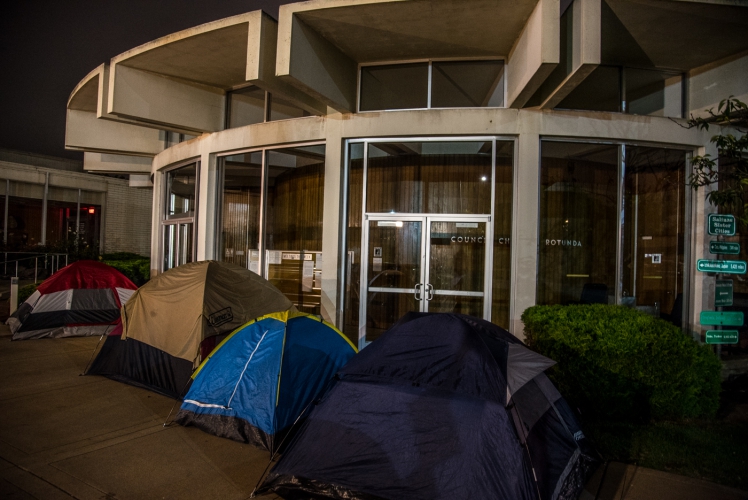 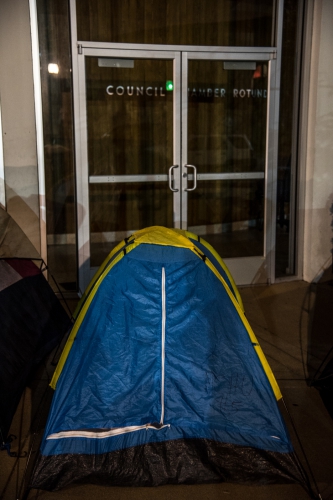 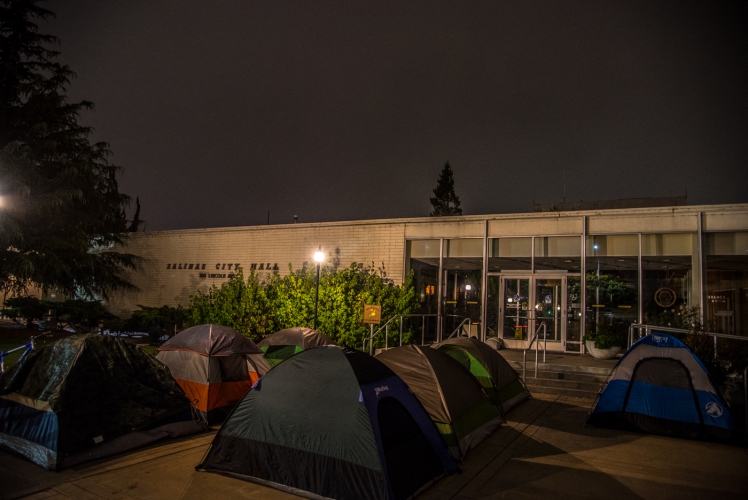 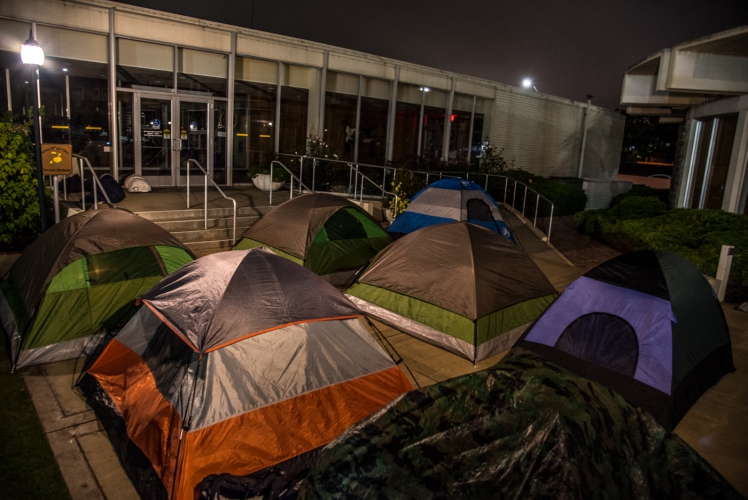 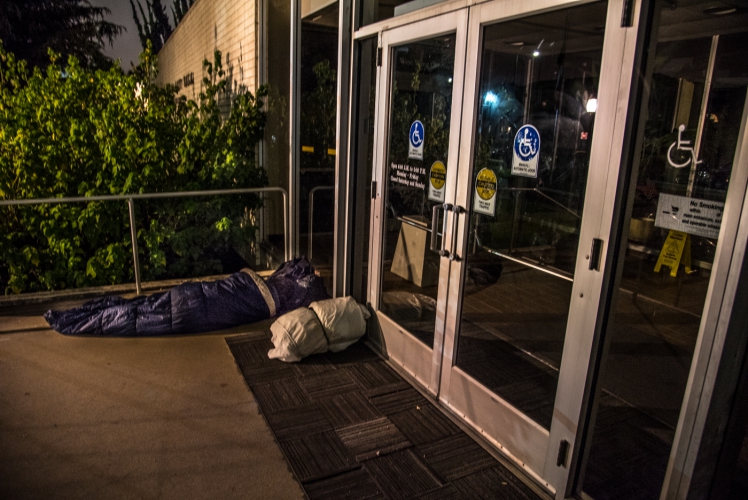 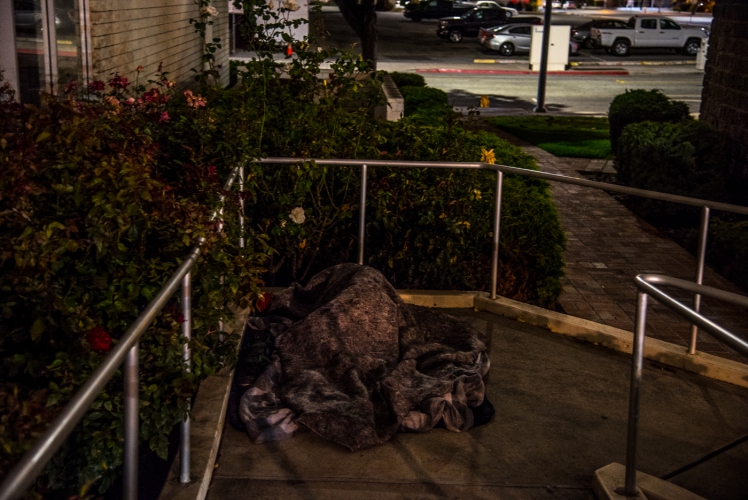 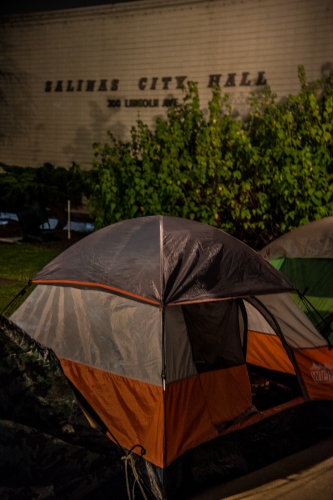 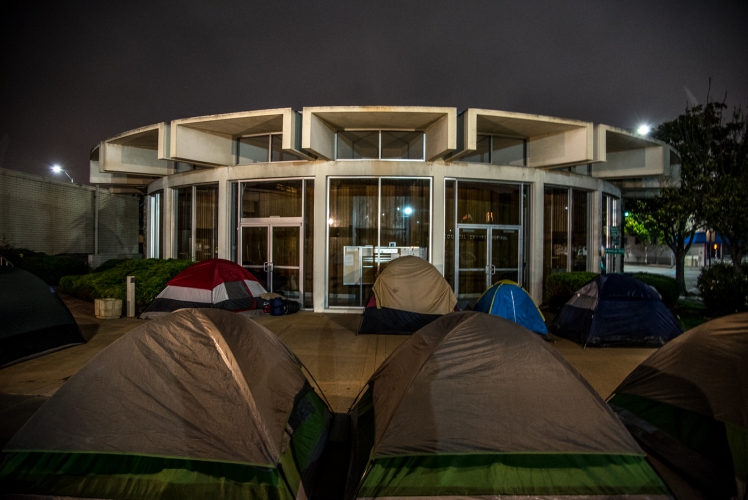 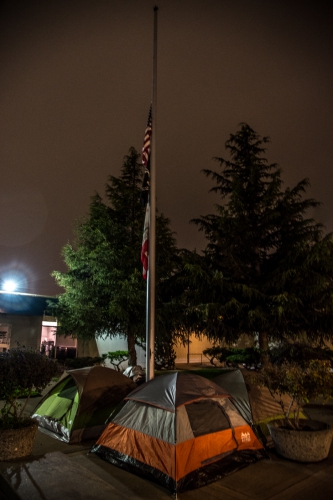 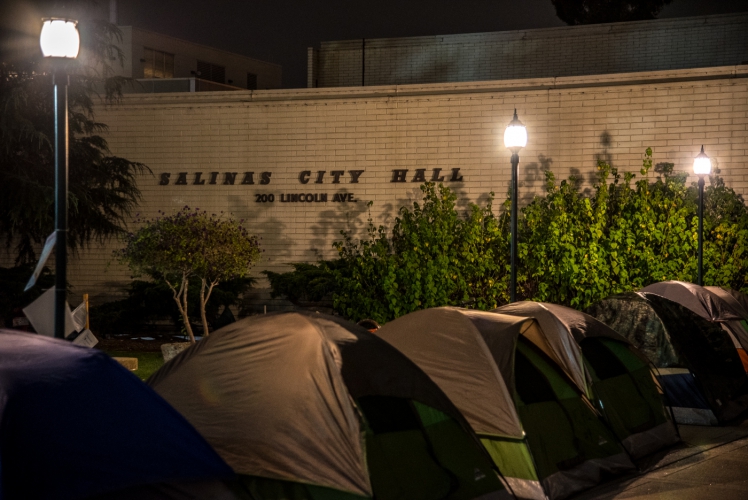 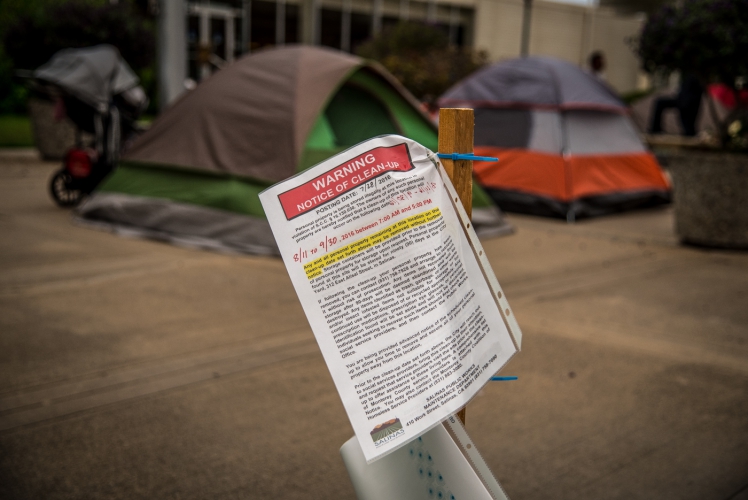 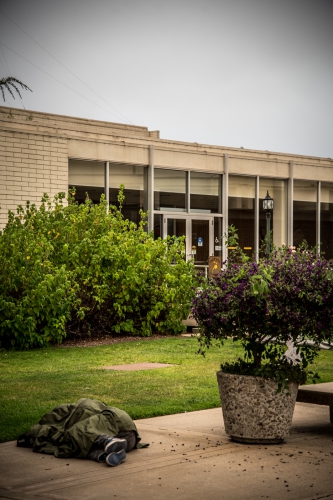 original image (935x1400)
Add Your Comments
LATEST COMMENTS ABOUT THIS ARTICLE
Listed below are the latest comments about this post.
These comments are submitted anonymously by website visitors.