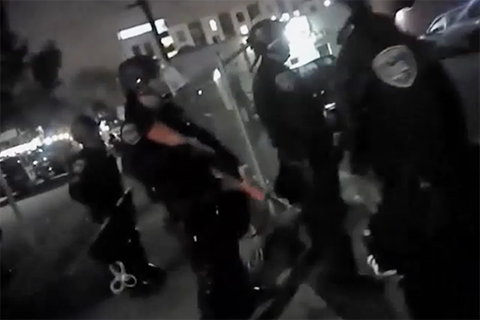 In a first-of-its-kind decision and a victory for police accountability and transparency, an Alameda County judge has ruled that a public agency can't charge excessive fees for police body worn camera footage. The public interest served by the disclosure outweighs the financial burden of the city to produce the footage, Alameda County Superior Court Judge Evilio Grillo ruled. The court ordered the city of Hayward to refund to the NLGSF the entire $3247 cost, except for the $1 charge for the DVD that contained the information.

"Hayward's body camera videos showed police officers shooting so-called 'less lethal' munitions at peaceful protesters while making remarks such as, 'They are fucking animals;' 'I got it up right now ready to go motherfuckers;' and 'Get a shot in his fucking ass,'" noted NLGSF board member Rachel Lederman. "If we had not been able to come up with the funding to obtain the nine clips that Hayward charged over $3,000 for, this wanton police violence would never have come to light."