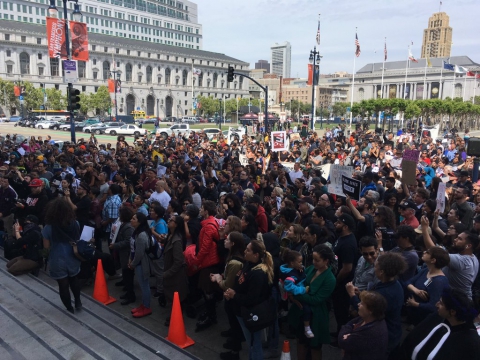 Frisco Five Suspends Hunger Strike But the Struggle for Justice Continues
With Hunger Strikers Hospitalized, the "Frisco 500" Vow to Continue the Fight to Fire Suhr

UPDATE: As calls for his firing continued, San Francisco Police Chief Greg Suhr was forced to resign hours after the SFPD killing of Jessica Nelson on May 19.

On April 22, the Frisco Five — Sellassie, Ike Pinkston, Equipto, Edwin Lindo, and Maria Cristina Gutierrez — set up camp in front of the Mission District police station on Valencia Street. To raise awareness of San Francisco police violence and racism and to demand the firing of Chief Suhr, all five stopped eating solid foods that day. The hunger strikers chose the Mission District station because three of the last four SFPD killings happened in the area, including that of Jose Luis Gongora just two weeks prior. In an open letter to San Francisco Mayor Ed Lee, they wrote, "We are the Frisco Five and we have offered our lives for the city we love."

The sacrifice of the Frisco Five provided inspiration for numerous community actions since to press the single demand that Suhr be fired. A huge march wound through the streets of San Francisco from the Mission District police station to City Hall on May 3. On May 5, Mayor Lee finally contacted the Frisco5 directly by phone and refused to fire Suhr. On May 6, hundreds of protesters overran City Hall, demanding a meeting with the mayor. San Francisco sheriff's deputies forcibly removed protesters, striking many with batons. Over 30 people were arrested.

On May 4, Sellassie was the first of the Frisco Five to be hospitalized due to deteriorating health. On May 6, the sixteenth day of the hunger strike, and with severe exhaustion taking its toll, attending physicians recommended the remaining four receive immediate hospital care. On May 8, the hunger strike was officially suspended. All five remain in the hospital with their prognosis unclear.

A General Strike has been called in honor of the Frisco Five for Monday, May 9.

"Couldn't Not Stand With the #Frisco5." City Hall Shut Down. Hunger Strikers to Hospital. |