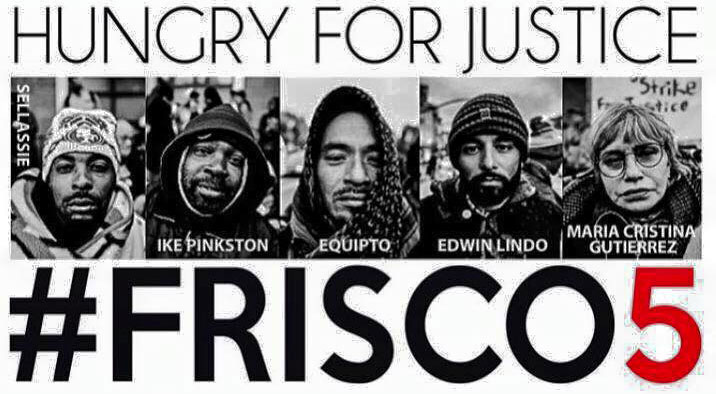 As a result of the incredible amount of pressure from the community, Mayor Lee finally contacted the Frisco5 directly by phone. The Frisco5 responded to the call and reiterated their one simple demand to Mayor Lee. They demanded that he fire Chief Greg Suhr.

He told the strikers that he would not fire the chief and he stood behind Chief Suhr’s record.The mayor went as far as to defend the Chief’s record. A record that includes the choking death of Mark Garcia at the hands of Greg Suhr in 1997. His record includes two demotions, a fajita gate scandal, a personal harassment suit that cost the city millions, two cases of racist text messages being exposed, a crime lab scandal and the murder of Mario Woods, Alex Nieto, Amilcar Perz-Lopez, Luis Gongora and many others.

The Mayor tried to defend himself by saying that he was working on reforms that are being implemented and he is trying to make progress with SFPD. His reactionary reforms for a department led by his scandal plagued appointee have come too late. They should have been implemented when his officers killed Kenneth Harding five years ago.

When told by the Frisco5 that they were committed to strike until their demands were met, the mayor’s response was “this is your choice... and whatever you do I hope you take care of yourself”.

The Frisco5 told him that their blood would be on his hands.

These empty words from an empty suit echo a city hall that cares more about money than they do about the black and brown community.

The Frisco5 shall continue to fast until their demands are met. They ask that the community stand behind them and show Mayor Lee that there will be no business as usual until he fires Chief Suhr and steps down as Mayor.

More Info:
Hunger For Justice SF
https://www.facebook.com/hungerforjusticesf/
Add Your Comments
LATEST COMMENTS ABOUT THIS ARTICLE
Listed below are the latest comments about this post.
These comments are submitted anonymously by website visitors.