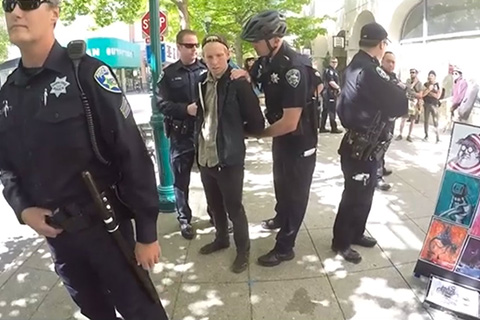 On Sunday, May 1, 2016, Joff Jones and Alex Skelton were arrested for defiantly displaying art "outside of a blue box" on Pacific Avenue in downtown Santa Cruz. This is their third arrest for displaying art outside of small boxes defined by four faintly painted blue dots in the public space of Pacific Avenue since August of 2015.

The City of Santa Cruz is using it's police force to ticket and arrest artists for free expression in the public space. Jones and Skelton created a video with footage showing numerous Santa Cruz Police officers ticketing and arresting them on May 1, 2016, for simply being "outside of a blue box" while displaying their art.

Pacific Avenue: Freedom Of Press At Its Finest ||