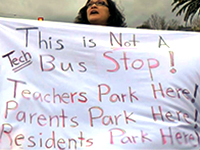 On February 6, at 8am, teachers at San Francisco's bilingual public Fairmount Elementary School joined with the Anti-Eviction Mapping Project to block three private tech buses. Buses from Google and Facebook were blocked in protest of the takeover of what had been four parking spots for teachers at the school by a tech bus stop. Teachers had not been consulted before their parking stops were privatized, just this past month.